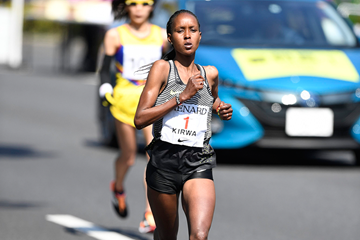 “I am very happy to win three in a row, despite falling at the start,” said Kirwa. “I was bit worried immediately after the fall. The pace makers did a good job of keeping up the pace and it was good that the pace did not slacken after they are gone.”

Yuka Ando, a marathon debutante who was 10th at the IAAF World Half Marathon Championships Cardiff 2016, finished second in 2:21:36, the fastest marathon debut by a Japanese runner and good enough for fourth on the Japanese all-time list behind Mizuki Noguchi, Yoko Shibui and Naoko Takahashi.

As her time was faster than the 2:22:30 target set by the Japanese federation, Ando clinched a spot on the team for the IAAF World Championships London 2017. “Since it was my first marathon, I was planning to run an aggressive race,” said Ando. “In order to challenge the Olympic silver medallist, I knew I need to stay with her. I told myself that if I cannot stay with Kirwa I cannot be world class, but at the end I could not keep up with her. My weakness has shown at the end.”

Competing in her second marathon, Mao Kiyota improved her PB by almost a minute to finish third in 2:23:47. As her time is faster than the top Japanese finishers at the Osaka and Saitama marathons, she may have a chance of making the team for the World Championships. Sayaka Kuwahara finished fourth while Hisami Ishii, another marathon debutante, finished fifth in 2:27:35.

Pace makers Visiline Jepkesho and Eunice Chumba were instructed to reach the half-way mark in about 1:11 while the third pace maker’s target was 1:12. Kirwa took a tumble just after the start, but apparently came out unscathed. The first kilometre was covered in 3:22 and by three kilometres, reached in 10:11, the lead pack was split into two groups with Kirwa, Ando, Kiyota and Ishii all in the first group.

The first 5km was reached in 16:51 and when the ninth kilometre was covered in 3:08, Kiyota and Ishii started to drift behind Ando and Kirwa. After passing 10km in 33:14, Kiyota bridged the gap and caught up with the leaders, but after passing 15km in 50:05, Kiyota fell behind again. She caught up to Kirwa and Ando once more, but soon fell behind them for good.

The leaders went through the half marathon point in 1:10:21, faster than scheduled time of 1:11, and both pace makers dropped out, leaving Kirwa and Ando to duel it out for the rest of the race. Naturally the pace slowed after the pace makers left the race. The 22nd kilometre took 3:30 and the 5km segment between 20 and 25 kilometres took 17:02, the slowest of the race.

The duel between Ando and Kirwa continued. Kirwa tried to shake Ando after 27km, and again after 31km, but both times Ando covered Kirwa’s move. Kirwa then tried again at 33km and continued to push the pace through the steepest uphill portion of the race which starts after 34km, and Ando had to let Kirwa go. Running alone, Kirwa covered the uphill kilometre in 3:15 and by 40km, reached in 2:13:57, Kirwa led Ando by 18 seconds.

Italy’s 2013 world silver medallist Valeria Straneo did not start the race, while both Monica Jepoech and Reia Iwade dropped out of the race after 15km.