Underscoring her position as Asia's top-ranked athlete, Salwa Naser added two more gold to her hefty medal haul this week to highlight the final day of the Asian Athletics Championships in Doha on Wednesday (24).

Naser, the 2017 world 400m silver medallist, captured five medals over the past four days, four of them gold. The most spectacular of those came via her anchor leg in the 4x400m relay, the penultimate event of these championships in Khalifa Stadium which in five months time will host the IAAF World Athletics Championships Doha 2019.

A distant fourth when she took the baton, Naser faced a deficit of some 20 metres as she sailed into the first bend. Gradually, she picked off one runner after another until her homestretch tussle with India’s Vismaya Velluva Koroth. She won that battle too, pulling away over the final ten metres to conclude her scorching 49.70 lap.

There, Naser got off to somewhat cautious start, trailing 100m winner Olga Safronova until the pair reached the middle of the final straight. Then she began to eat up ground, pulling even with about 15 metres to go before finally pulling into the lead five metres from the finish. Her 22.74 performance - 0.13 ahead of Safronova - was her second half-lap personal best in as many days. Yesterday she clocked 22.84 to tie the championships record.

As she left the track, Naser embarked on a de facto ninth race of the championships, rushing through the media mixed zone without stopping to speak, disappointing the journalists gathered.

In the 4x400m relay, Bahrain clocked 3:32.10, edging India by 0.11 with Japan taking the bronze. The Sri Lankan quartet, running with black arm bands to honour those who were killed in terrorist attacks on Easter, paid their respects with a fourth place finish in 3:35.06, a national record.

The best performance on the infield came courtesy of Syrian Majd Eddin Ghazal’s victory in the high jump, the first major gold of his career.

Shaking out an evening chill with three tries at 2.26m, he then topped 2.29m on his first attempt to seal the win. After clearing 2.31m with his first, he followed up with two strong attempts at 2.35m before capping the competition with a near-miss at a would-be 2.37m lifetime best. He was pleased.

“I was feeling cold which is why I was jumping at all the heights at the beginning, which I usually do not do,” he said. “Then I started to warm up and feel better.”

Ghazal took world bronze in London in 2017, but has managed just silver and bronze in five previous appearances at the continental championships. “It is strange that after all these years I finally have my first gold.” His was also the first gold for Syria at these championships in 26 years.

Takashi Eto and Naoto Tobe of Japan took silver and bronze with 2.29m and 2.26m respectively.

Japan had a good day, taking gold in the men’s long jump and 4x400m relay and women’s 100m hurdles.

Yuki Hashioka continued his steady rise, turning his world U20 gold from Tampere into continental senior gold just nine months later. The 20-year-old led early on with an 8.08m leap in the second round, just one centimetre shy of his personal best, but China’s Zhang Yoaguang reached 8.13m in the fifth to take command. Hashioka dug deep and rallied, producing an 8.22m lifetime best with his final jump to take the title. Hashioka said he’s now targeting 8.40m this season.

Japan closed the competition with a decisive victory in the men’s 4x400m relay, clocking 3:02.94 ahead of India. The latter were later disqualified for obstruction, elevating China, who clocked 3:03.55, to second.

Abderrahman Samba couldn’t produce late race heroics like Naser’s, but his 44.54 leg was the second fastest of the race. He crossed the line fourth in 3:03.95, but Qatar was later upgraded to bronze.

Japan also took the day’s first title on the track with Ayako Kimura’s decisive 13.13 win in the 100m hurdles, well clear of China’s Chen Jiamin who clocked 13.24 for silver.

Feng Bin, a 2016 Olympic and 2017 world finalist, put the women’s discus competition out of reach in the first round with a 65.36m effort, adding 22 centimetres to her previous lifetime best set in 2016. Teammate Chen Yang came closest, hitting 61.87m in the final round to take silver.

In another lopsided contest, Xie Wenjun added a second Asian 110m hurdles title to his collection with a 13.21 run, clipping 0.02 from his previous best. He was thrilled.

“I don’t know how much faster I can go, I just want to run fast,” the 28-year-old said, “starting from the Diamond League in Shanghai.”

Further back, Yaqoub Alyouha of Kuwait was second in 13.35, with Chen Kuei-Ru of Chinese Taipei taking the bronze in 13.39.

For the second time in as many days, India put a stop to Bahrain’s bid for middle and long distance dominance. Yesterday it was Gomathi Marimuthu in the women’s 800m and today it was Palakeezh Unnikrishnan (P.U.) Chitra, who successfully defended her title in the women’s 1500m.

Shadowing Bahraini Winfred Mutile Yavi - who was chasing a third title - and teammate Tigist Gashaw from the 800 metre point, Chitra made her decisive move with just over 200 metres remaining. First she passed Yavi as they approached the bend and then powered by Gashaw as she entered the final straight. Chitra reached the line in 4:14.56, 0.25 ahead of the runner-up. Yavi held off Japan’s Ran Urabe in the waning stages to add bronze to her 5000m and steeplechase golds.

But Bahrain did collect wins in the men’s 1500m and 5000m to take four of the five middle and long distance titles on offer on the men’s side.

Abraham Rotich Kipchirchir was the class of the 1500m, cruising to a 3:42.85 win. But it took a careful read of the photo to determine who would take silver. Ultimately, India’s Ajay Kumar Saroj was rewarded for his late race charge over Qatari Musaab Ali. Both were credited with 3:42.18; Saroj got the edge by 0.006.

Olympic champion Dilshod Nazarov of Tajikistan won the hammer throw, but he didn’t secure it until reaching 76.14m in round five. He too said the unusual evening chill kept him from finding his rhythm.

The 2021 Asian Championships will take place in Hangzhou, China. 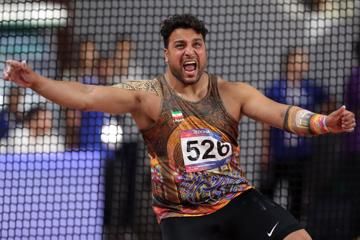 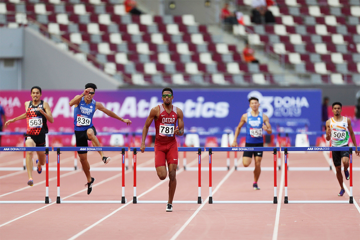 Samba sizzles 47.51 at Asian Championships in... 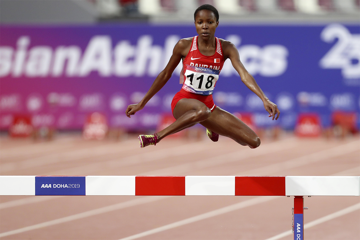 Bahrain and China continue their dominance at...