Nick Willis provided the unexpected highlight when he delivered a scorching 3:51.61 to win the men’s mile in meeting record time.

It was a world-leading mark, an indoor best for Willis, and a New Zealand indoor record formerly held by middle-distance great John Walker.

“I wanted to negative split the race, running each section faster than the last, but the first 400 was too fast,” said Willis

Led by pacemaker Shawn Roberts, Willis was back in third and behind multiple World Indoor Championships medallist Abdalaati Iguider when Roberts stepped off just past halfway, but Willis was able to put Iguider’s feet to the fire in the last two laps, carrying Ben Blankenship along with him, the latter finishing second in 3:53.13.

“I treated my indoor season seriously in 2008,” said Willis, reflecting on the year when he won an Olympic silver medal, “and it seems to have worked.”

Brenda Martinez ran a 4:27.77 1600m to anchor a USA team to a world indoor best of 10:42.57 in the women’s distance medley relay, a non-championship event that is rarely run outside the USA but will feature at this year's IAAF World Relays.

After two scorching 1200m legs, where a “New York All-Stars” team held the lead and separated two leaders from the pack of six, the record was a near certainty.

By the time the baton came to Martinez with a narrow lead over Nicole Tully of the New York All Stars, 4:36 would have been sufficient to break the record.

“We had a team discussion last night,” said Martinez. “We agreed that if they gave me the biggest lead they could, my current fitness would be enough.”

Martinez, who anchored a winning USA 4x800m team, as well as being part of the 4x1500m squad, at the inaugural IAAF World Relays in The Bahamas last May, was making her first and likely only indoor appearance this season.

Instead of needing to make up time, Martinez had to shake the shadow of Tully. Martinez actually lost the lead going in to the final lap, but mustered a ferocious kick over the last 100m to regain the lead and put her name in the record books.

Their winning time was almost six seconds faster than the world outdoor best for the distance medley relay.

She wasn’t seriously pressed late in the race despite sharing the starting line with world and Olympic silver medallist Sally Kipyego and steeplechase ace Emma Coburn; the former took second in 5:40.35 and the latter third in 5:41.11.

Seyaum’s mark is a world junior best for the event in addition to being a world-leading mark.

Another world-leading mark came in the men’s shot put when Ryan Whiting pitched the shot out to a massive 21.43m on his fourth attempt to really put his season in motion.

In the women’s two miles, 2014 Diamond Race 1500m winner Jenny Simpson took the lead early and simply pulled away from Ethiopia’s Sentayehu Ejigu to win in 9:18.35.

“There’s a fine balance between settling in and keeping the pace up,” said Simpson. “I had to listen closely to the splits in order to not slow down.”

The victory erased a 13-year-old US national record and gave Simpson a measure of relief from the 2014 meeting, when she miscounted her laps and came to a full stop after leading with a lap to go.

“I needed to run that 16th lap so they wouldn’t fine me,” Simpson joked after the race.

Former US 1500m champion Treniere Moser picked up the win and a world-leading time in the women’s 1000m, running 2:37.86 to grab victory from her training partner, the world junior 3000m champion Mary Cain.

“I’ve had some down years, but now I’m racing up to my own expectations,” Moser said. “It’s all about June and making the team for Beijing. The best in the world can close very fast, so I’m here to work on my speed.”

Now the second-fastest American ever at the distance, Centrowitz indicated that the national record was still a goal. “I’ll have to tackle it another time,” he said. “I thought I had it, but I was a couple of tenths slow.”

Dejen Gebremeskel won the men’s 3000m in 7:48.19, less than 0.2 ahead of Bernard Lagat, whose move to the front with two laps remaining underscored the point that Lagat, now 40, is running for more than age group records.

“I expected Lagat to have a fast last lap,” said Gebremeskel. “Of course Bernard has a strong kick. Last year I ran road races because there was no world championship after the World Indoors, but this year I will run the 5000m in Beijing.”

Mary Saxer won the women’s pole vault with a clean slate up to 4.50m. World indoor record-holder Jenn Suhr only cleared that on her second attempt after passing all the other heights up to that point. Suhr explained her training had been hampered by illness, and added: “in hindsight, I probably shouldn’t have come.”

Tiffany Townsend upset Natasha Hastings in the final strides of the 300m, coming around the outside to win 36.74 to 36.80, the second and third fastest marks of the season in that event. 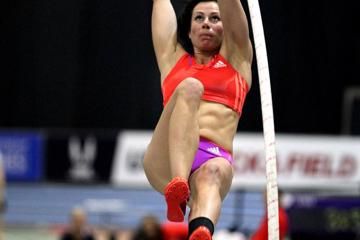 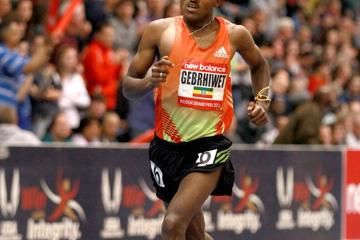 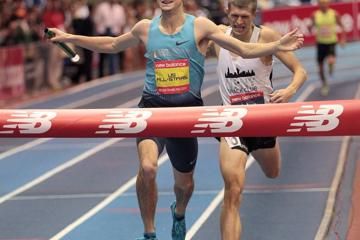