It was the 33-year-old Kenyan’s fifth career win in 17 marathons and it was a successful return to the island state as his last outing over the classic distance was a win at the Fubon international marathon in December.

"Although it’s been raining for some days, today's weather was surprisingly good,” said Chebor. “Also, the cool temperatures made the run really easy. The scene is very beautiful but compared with the city marathons in general, the hills and sea wind are quite challenging".

Nevertheless, Chebor was a convincing winner of the only IAAF Competition in Chinese Taipei, coming home more than a minute clear on the hilly course from the well-known Japanese runner Yuki Kawauchi, who was second in 2:14:12. Third was Kenya’s Julius Karinga in 2:14:52.

The first local runner was Jin Pin He, who will represent Chinese Taipei at the Rio 2016 Olympic Games, in 2:30:46.

Olha Kotovska, from Ukraine, fulfilled her role as favourite and won the woman's race in 2:36:38.

She was followed home, at a distance by two Ethiopians. Bentu Shiferaw Wodajo took second 2:38:11, three seconds ahead of Meseret Godana Agama, from Ethiopia, with a time of 2:38:14. 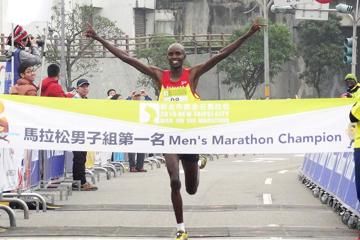