Keitany dismantled the women’s field with a breath-taking display of distance running, coming home more than three minutes clear of her closest pursuer in 2:22:48, the second fastest time ever run in New York.

Desisa, meanwhile, claimed his first title here with a powerful finish in Central Park, the Ethiopian edging his compatriot Shura Kitata to win by two seconds in 2:05:59.

But despite much late-race drama in the men’s race, it was Keitany who stole the show, the 36-year-old clocking a stunning 1:06:58 for the second half of the race to come home in splendid isolation.

During the first half, Keitany kept a lid on things, nestling in the pack as world half marathon champion Netsanet Gudeta and fellow Ethiopian Rahma Tusa towed a leading pack of eight through the half marathon in 1:15:49.

“I didn’t want to rush at the beginning to suffer at the end,” said Keitany, who faded badly at the London Marathon earlier this year, having been on world record pace at the start. “I wanted to be comfortable so I could be strong at the finish.”

A 5:08 mile followed by a 5:09 from Gudeta whittled the field after halfway, with Tusa and Keitany the only two able to keep pace as they reached 15 miles. It was then that Keitany announced her intentions. She put in a 4:57 mile followed by a 4:55 and a 4:58, the latter of which cracked her one remaining rival, Tusa.

Keitany never stopped applying pressure thereafter, a 4:56 19th mile and a 5:01 20th mile giving her a 53-second lead over Tusa as they approached the business end of the race.

At that point, Tusa began to feel the full effects of attempting to stay with Keitany and in the miles that followed she was caught and passed by Vivian Cheruiyot, the London Marathon champion from Kenya who had measured her effort in a much more even fashion.

But with three miles to run, Keitany had more than two minutes to spare over Cheruiyot, her advantage only growing as she entered the closing miles through Central Park.

Inevitably, her splits began to slow as she neared the finish, but given what had come before what was truly amazing is that no one – even those who had run more conservatively – was finishing faster.

Her splits were simply staggering: Keitany ran a 15:19 5km between 25 and 30 kilometres and her 10km segment which took her to 35 kilometres was run in 30:53, a world-class time in its own right.

Behind Keitany, Cheruiyot had to be content with a runner-up spot in 2:26:02 after struggling with a variety of injuries, aware that on this particular day she had run into an express train in Keitany. “I had a hamstring injury and knee and calf injuries so I was running in pain throughout,” she said. “I have to be happy with second.”

Shalane Flanagan was highly emotional as she reached the finish in third place, last year’s champion battling strongly in the closing miles to get herself on the podium in what looks likely to be her final marathon, clocking 2:26:22.

“I’m proud that I kept fighting even though there were some tough moments in there,” said Flanagan. “I love this community, the running community, and I’ve had an unbelievable time competing here.”

Her fellow US athlete Molly Huddle wasn’t far behind, the 34-year-old finishing in 2:26:44 for fourth.

Tusa paid a heavy price for her exuberance and faded to fifth in 2:27:13, with Boston Marathon champion Desiree Linden next home in 2:27:51.

The men’s race was a far more competitive affair, with the result in doubt until the final uphill run to the finish in Central Park.

With last year’s champion Geoffrey Kamworor possessing such well-known speed and strength at shorter distances, a trio of Ethiopians teamed up through the first half, appearing desperate to draw the sting out of the Kenyan long before he reached the finish.

Kitata, Desisa and Tamirat Tola took turns pushing the pace, with Kitata doing most in the opening half, often running 30 to 40 metres in front of the leading pack. They hit halfway in a solid 1:03:55, at which point the trio had just two Kenyans, Kamworor and Festus Talam, for company.

Talam was the first to crack just after 20 miles, with Tola falling away after 22 miles. It was then Kamworor hit the front for his first major move, injecting a 4:29 mile which left just him and Desisa at the front.

Try as he might, Kamworor simply couldn’t shake Desisa over the final two miles, and as they entered the last mile it soon became clear the Kenyan’s energy reserve was becoming bankrupt.

Instead it was Kitata who bounced back to life, closing down on Desisa and hitting the front inside the final mile before Desisa responded with an irresistible surge which carried him to victory in 2:05:59.

“I am very, very satisfied to be the champion,” said Desisa. “I have finished on the podium before and this time I did such hard training, but with everything under control. Today is my day. Thank you, New York.” 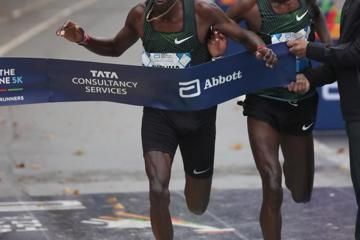