Noah Lyles dashes to a 19.50 meeting record in the 200m at the IAAF Diamond League meeting in Lausanne (© Giancarlo Colombo)

By the time Noah Lyles took to his blocks for the 200m at Lausanne’s Athletissima on Friday (5), three meeting records had already been broken at the eighth IAAF Diamond League fixture of 2019.

To match the meeting-record-breaking feats of Timothy Cheruiyot in the 1500m, Pitor Lisek in the pole vault and Salwa Eid Naser in the 400m, Lyles would have to improve on a mark set by Usain Bolt in 2012, one of the great Jamaican’s most successful seasons.

But the two-time IAAF Diamond League champion was unfazed. If anything, he was highly motivated after a narrow loss in Rome – albeit in a swift 19.72 – in what was his opening 200m race of the year.

This time, there was no beating Lyles.

Not only did it take 0.08 off Bolt’s meeting record, it also moved Lyles to fourth on the world all-time list behind Bolt, Yohan Blake and Michael Johnson. It's also the fastest 200m performance in the world since the 2012 Olympic final.

In second, Alex Quinonez improved his own Ecuadorian record with 19.87 while De Grasse finished in 19.92, just 0.03 ahead of fellow Canadian Aaron Brown.

“The track here is burning up,” said Lyles. “I'm feeling good here. Me and my coach have been working really hard. I know I'm running exactly how my coach wants me to run. It was a good, well-executed race. It was about getting out strong.

“There’s nothing better than seeing the accomplishments of what you have put in. Each year I'm making a huge jump. I'm very satisfied. It's time for the next race.”

The world silver medallist sat right behind the pacemakers as they brought the Kenyan through 800m in 1:49.8 and 1000m in 2:17.7. As he reached the bell, Cheruiyot led by more than a second from world indoor champion Samuel Tefera.

European champion Jakob Ingebrigtsen came through strong on the final lap, but Cheruiyot could not be caught, winning in 3:28.77 to break the previous meeting record of 3:29.51 set by Ali Saidi Sief in 2001. His time was also the fastest 1500m performance outside Monaco since 2004.

"Super excited about my time today," Cheruiyot said. "The Diamond League is extremely important me and the competition is intense. And then there is the World Championships so it is a long season ahead. I certainly want to win as many as I can especially when I am in such a great shape."

Following an indifferent run in Stanford last weekend, multiple world and Olympic champion Shelly-Ann Fraser-Pryce looked every bit back to her best with a convincing 100m win in Lausanne.

The Jamaican got off to her usual strong start and was never headed as European champion Dina Asher-Smith and African champion Marie-Josee Ta Lou trailed in her wake.

She stopped the clock at 10.74, bringing her tally of sub-10.8 performances to a record-tying 13. Asher-Smith finished second in a season’s best of 10.91 with Ta Lou taking third in 10.93. In fourth, two-time world champion Dafne Schippers clocked a season’s best of 11.04.

“I came to Lausanne in a very happy state of mind, despite a poor performance in Stanford,” said Fraser-Pryce. “I am delighted with 10.74 today. Such ups and downs make sure that you do not take anything for granted and do not get complacent.

“It’s a long season this year, but I’m feeling great,” she added. “Let’s see how the season progresses; I will happily embrace anything that the season will throw at me. I am going to enjoy it and do my best.”

In the first track event of the evening’s main programme, the women’s 400m, Salwa Eid Naser broke one of the oldest Athletissima meeting records.

Another IAAF Diamond League 400m win for Salwa Naser, this time in Lausanne

Marie-Jose Perec’s meeting record of 49.45 had stood since 1996 – two years before Naser was born – and had withstood challenges from the likes of Cathy Freeman, Sanya Richards-Ross and Shaunae Miller-Uibo.

Naser chopped 0.28 off Perec’s record, but it didn’t come easy. The Bahraini sprinter led through half way in 23.9 and was still comfortably ahead with 100m to go, reaching 300m in 36.1. But Niger’s Aminatou Seyni moved up a gear and started to eat into Naser’s advantage.

Seyni almost caught Naser, but the world silver medallist just held on, winning in 49.17 to Seyni’s 49.19, an improvement on her own national record by more than a second.

Hagos Gebrhiwet put in an impressive final sprint to cross the line well clear of his rivals in the men’s 5000m. Unfortunately for the Ethiopian, though, he had misjudged his laps and still had another circuit to run.

The race had been set up to be a fast one, but once the pacemaker drifted off the target pace at 3000m, reached in 7:51, it became more of a tactical affair. The field bunched up and everyone was reluctant to lead in the closing kilometres, but Gebrhiwet made his way to the front of the pack with Yomif Kejelcha, Telahun Bekele and Abadi Hadis close by.

But when Gebrhiwet started kicking hard with 700 metres left to run, it became clear that he had either launched the start of a long run for home or had miscounted his laps. Sadly for the Olympic bronze medallist, it was the latter.

He sprinted away from the field and, despite crossing the line with the clock reading 12:00, still hadn’t realised his error and started celebrating. It was only when Kejelcha continued past him that Gebrhiwet realised and willed his weary legs back into action, re-joining the chase pack.

“I got injured after Shanghai and it took me some time to recover,” said Kejelcha. “Today’s win is a great boost to my confidence.”

No Kenyan man had won an 800m race – scoring or otherwise – in the IAAF Diamond League so far this year, but here in Lausanne there was a Kenyan 1-2-3. The winner, however, was still something of a surprise.

Paced through the first lap in 50.7, Puerto Rico’s Wesley Vazquez took up the running and passed through 600m in 1:17.0. Emmanuel Korir moved up on to Vazquez’s shoulder as they entered the home straight and looked poised to strike, but his form started to deteriorate in the closing stages, allowing fellow Kenyans Wycliffe Kinyamal and Ferguson Cheruiyot Rotich to come through.

Orlando Ortega produced his fastest time for three years to win the men’s 110m hurdles. The Olympic silver medallist had arrived in Lausanne off the back of a handful of victories, including at last weekend’s IAAF Diamond League meeting in Stanford, but his season’s best of 13.24 made him just the fourth fastest in the field.

The Spaniard produced a near-flawless race and held off a strong challenge from NCAA runner-up Daniel Roberts in the latter stages to win in 13.05. Roberts, competing in his first race as a professional athlete, clocked 13.11.

Shamier Little replicated her 400m hurdles victory from 12 months ago, clocking a season’s best of 53.73. The 2015 world silver medallist went out hard and was already level with world champion Kori Carter, one lane outside Little, at half way.

Along the home straight, two-time world champion Zuzana Hejnova and Olympic bronze medallist Ashley Spencer were closing on the leader, but once Little had negotiated the final barrier, her superior flat speed carried her to a comfortable win.

Hejnova and Spencer were both timed at 54.11 with the Czech athlete getting the verdict. Spencer’s time was her fastest performance since winning in Lausanne two years ago. 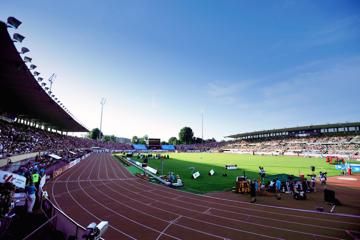 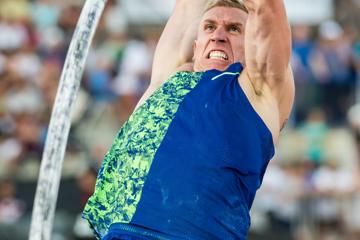