Oduduru won the 100m in 9.86 seconds at Austin, Texas, tying Noah Lyles and Christian Coleman for the 2019 world lead and coming within .04 of Coleman’s collegiate record. Oduduru won the 200m in 19.73 to trail Michael Norman and Lyles this year, and also broke the championships record of 19.87. (Walter Dix got to keep his 19.69 collegiate record from 2007.)

Oduduru a 22-year-old Nigerian, said his coach told him “don’t be scared” and to do what he had done all season. Do that, the sprinter said, “and everything is going to be fine.”

He led Texas Tech to its first men’s team title. Texas Tech scored 60 points to 50 for runner-up Florida, led by Holloway. Houston was third with 40.

Impressive evening for Holloway, too

Holloway, too, had a night for the ages. In order, he:

- Won the 110m hurdles in 12.98, breaking Renaldo Nehemiah’s 40-year-old collegiate record of 13.00. Holloway had to run that fast because fast-closing Daniel Roberts was second in 13.00, tying Nehemiah. Holloway tied for 18th on the all-time performers list, ninth among Americans. Together, Holloway and Roberts ran eight of the 10 fastest times in collegiate history this season.

JuVaughn Harrison, after leaping 8.20m in Wednesday’s long jump, became the first in meet history to win a long jump/high jump double. He jumped to a PB of 2.27m Friday. Eight jumpers cleared at least 2.21m, which had not happened since 2001.

In the 400m, Kahmari Montgomery climbed to No. 8 on the all-time collegiate list to win in 44.23, just edging Trevor Stewart who clocked 44.25, also a personal best.

Bryce Hoppel completed an indoor/outdoor sweep of the 800m, becoming the No. 5 collegian ever in 1:44.41.

Adrian Piperi took the shot put Wednesday with a distance of 21.11m, a personal best and his second effort over 22 metres. He was silver medalist at last year’s IAAF U20 World Championships. Defending champion Denzel Comenentia of the Netherlands was second at 20.77m. Comenentia, also defending champion in the hammer, finished fifth.

Anderson Peters of Grenada broke his own championships record with a javelin throw of 86.62m (old mark 82.82m last year). Curtis Thompson (78.43m) and Trinidad and Tobago’s Tyriq Horsford (75.59m) made Mississippi State the first school to finish 1-2-3 in the javelin since Oregon did so in 1964.

The biggest upset of the championships came during Wednesday’s opening night, when Chris Nilsen cleared 5.95m in the pole vault to break his own championships record of 5.83m. Armand Duplantis, who represents Sweden internationally, was second at 5.80m. On 11 May, Duplantis set a world lead of 6.00m, also a collegiate record.

Seven vaulters cleared 5.70m, most ever at the NCAAs. Previous record was three in 1991. 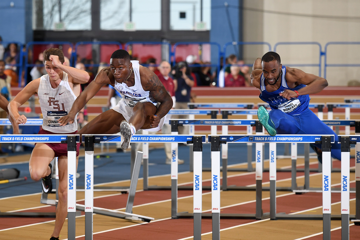 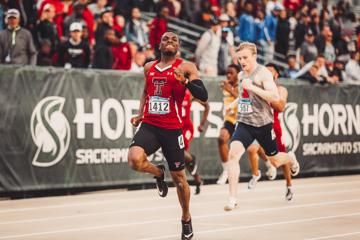