Blessing Okagbare added another impressive result to what has become a superb sprint season, clocking 10.63 for 100m at the Nigerian Championships in Lagos on Thursday (17).

The wind reading was 2.7m/s, so above the limit allowed for record purposes, but the result places Okagbare joint second on the world all-time list for performances achieved under all conditions.

These performances in Olympic year add to the 10.72 run by Sha'Carri Richardson in April and the 10.78 by Elaine Thompson-Herah in May, plus the wind-assisted 10.74 (2.2m/s) by Cambrea Sturgis as part of her sprint double at the NCAA Championships last weekend.

In Lagos, Okagbare fell to the track in delight when she saw her time. The Olympic and world medallist had earlier clocked 10.99 in the semifinals and ran 10.90 at the Wanda Diamond League meeting in Doha at the end of last month.

Rosemary Chukwuma was second in 11.07 and Grace Nwokocha third in 11.11 in that Nigerian Championships race.

Bahrain’s Abdelrahman Mahmoud threw 21.15m to break the Asian shot put record at the Arab Championships in Rades, Tunisia. That mark improves on his previous outdoor best of 20.68m, while he threw an Asian indoor record of 21.10m in January.

BACK
Pages related to this articleAthletes
Blessing OKAGBARE 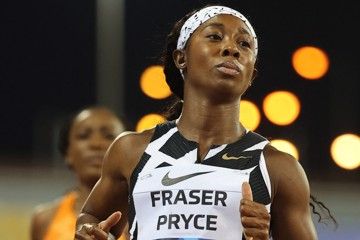