Allison Grace Morgan and Donald Cowart of the USA took the elite titles at the 2nd Pan American Cross Country Championships at the Caraballeda Golf Course in the state of Vargas, Venezuela, on Friday (4).

The duo, wearing the USA uniform for the first time, led their country to top the overall standings after compiling results from all six races (under 18, under 20 and senior) for both men and women. A total 130 athletes from 11 countries braved the 30C temperatures.

In the men’s 10km race, Morgan’s compatriot Cowart held off the challenge from Brazil’s Gilberto Silvestre, silver medallist at the 2015 edition, to cross the finish line first in 31:20, ahead of Silvestre (31:36) and USA’s Max King (31:43).

Peru featured prominently in the event with their athletes winning medals in five of the six races, including two titles in the under-18 category.

Ruth Karina Basilio became the first continental champion on Friday as she covered the 4km race in 14:35, in a close battle with Mexico’s María de Jesus Ruiz, second in 14:36. Another Peruvian, Lida Meneses, rounded out the podium in third with 14:56.

Edward Condori gave the South American nation its second win of the day as he covered the 6km race in 20:27 ahead of Jose de Sousa of Brazil (20:35) and Venezuela’s Frammik Semprun (20:47), the only medal winner for the host country.

The U20 crowns went to Canada’s Branna McDougall and Brazil’s Daniel Ferreira, who both improved from their bronze medal performance a year ago in Colombia.

McDougall and fellow Canadian Madeleine Ghazarian moved away from defending champion Saida Menenses in the 6km race to set the stage for a photo finish, with just 0.39 seconds separating both athletes: McDougall (21:31.33) and Ghazarian (21.31.72). Meneses settled for third in 21:58.

Ferreira covered the 8km distance in 26:06 to win Brazil’s only title on Friday. Thomas Pollard of the USA and Omar Ramos of Peru joined him on the podium.

Athletes from Ecuador, Jamaica, Puerto Rico, Panama, Colombia and Trinidad and Tobago also took part in the annual event, held for the first time in Barranquilla, Colombia, in 2015.

BACK
Pages related to this articleAthletes
Allison Grace Morgan 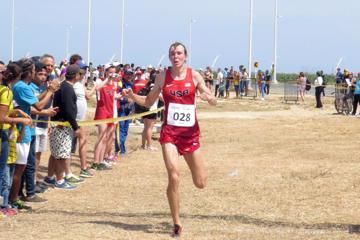