Olympic champions Ruth Jebet and Omar McLeod, who arrived in Paris talking in terms of world records in their respective 3000m steeplechase and 110m hurdles events, found life had other plans for them at the IAAF Diamond League meeting in the Stade Charlety as both ended up limping away with injuries incurred in the course of their races.

Jebet, who had hoped to improve upon the world record of 8:52.78 she had set at the Meeting de Paris last year in the Stade de France, lost all hope of that with a moment of misjudgement at the water jump with just over three laps remaining, eventually struggling home in fourth place, in 9:10.95, in a race won by Kenya’s Beatrice Chepkoech in 9:01.69.

McLeod, who had easily won his earlier heat, drifted out of contention over the final three hurdles, finishing last in 13.41 and then subsiding to the track holding the back of his right knee. Victory went to his Jamaican teammate Ronald Levy in a personal best of 13.05 ahead of Britain’s Andrew Pozzi, also in a personal best of 13.14, with home hurdler Garfield Darien edging world champion Sergey Shubenkov for third in 13.15.

Ronald Levy en route to his upset victory in Paris

At the point where she fell, the 20-year-old Jebet was poised on the shoulder of Chepkoech and looked good for a win, even if the windy conditions were making it unlikely that she would be re-writing the record books on this occasion.

Thereafter it looked as if her 18-year-old training partner, Kenya’s Celliphine Chespol – a strangely similar figure to her, small and powerful, with short hair – would move through to win as she had at the IAAF Diamond League meeting in Eugene, where she won with a world U20 record of 8:58.78, the second fastest of all time, despite her own water jump drama as she temporarily dislodged a shoe.

But Chepkoech, fourth at the Olympics and second at the IAAF Diamond League meetings in Doha and Eugene, held on to claim the win, with Kenya’s world champion Hyvin Kiyeng moving through for second place in 9:06.00, and Chespol settling for third in 9:07.54. Jebet finished just ahead of USA’s Olympic bronze medallist Emma Coburn, who clocked 9:11.08 before limping heavily from the track.

“My aim was to run 9.00 but the wind was too strong and my body was not moving,” said Chepkoech. “In London, I think the main opponents will be my Kenyan teammates. Of course we will cooperate, but it will be a big fight too.”

Levy, 24, was a happy athlete afterwards. “Things are looking good before the World Championships,” he said. “I know what to do at the championships now.”

A dramatic finish in the men’s 3000m saw two of the world’s most talented middle-distance runners – Ethiopia’s 19-year-old world indoor champion Yomif Kejelcha and Kenya’s 21-year-old Ronald Kwemoi, winner at two IAAF Diamond League meetings already this season – charge for the line. But neither could resist the final burst of Kejelcha’s 23-year-old compatriot Muktar Edris, who crossed first in a personal best of 7:32.31. Kwemoi took second in 7:32.88, with the leggy Kejelcha clocking 7:33.37.

Muktar Edris in the Paris 3000m

Olympic triple jump champion Christian Taylor underlined his position as favourite for another big gold this summer as he won with a second-round best of 17.29m, ahead of the compatriot who took silver behind him in Rio and won last weekend’s US Championships – at which Taylor made a token appearance – in a personal best of 17.91m, Will Claye, who managed a best of 17.18m here.

Germany’s Max Hess was third with a season’s best of 17.07m.

Botswana’s 2012 Olympic silver medallist Nijel Amos, still seeking form this season, appeared to find it as he rounded the final bend in the 800m and held off the challenge of three top Kenyans to win in a season’s best of 1:44.24.

The concluding event of the evening, the men’s 200m, went to Turkey’s Ramil Guliyev, who clocked 20.15 to finish ahead of Churandy Martina of the Netherlands, who recorded a season’s best of 20.27, and Rasheed Dwyer of Jamaica, third in 20.45.

China’s world and 2012 Olympic silver medallist Gong Lijiao earned her shot put victory in truly remorseless fashion, with six escalating distances, all beyond her closest opponent, culminating in a final effort of 19.14m.

Jamaica’s Novlene Williams-Mills, the 35-year-old multiple medallist at global championships, showed she still has what it takes in the 400m as she won in 51.03 ahead of Courtney Okolo of the United States, who clocked 51.19, and Jamaican champion Shericka Jackson, third in 51.91.

Earlier in the evening, Olympic decathlon silver medallist Kevin Mayer did his World Championships ambitions in the post-Eaton era no harm at all in a showcase triathlon, recording his first ever 70-metre-plus javelin throw, 70.54m, and within half an hour lopping more than two tenths off his 110m hurdles personal best of 14.01 as he clocked 13.78 despite knocking over the last hurdle.

BACK
Pages related to this articleAthletes
Ronald LEVY 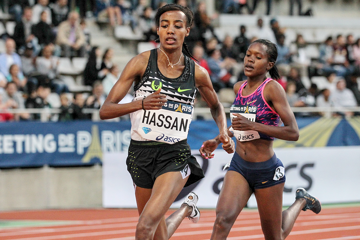