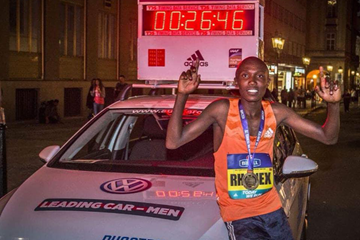 World U20 champion Rhonex Kipruto sped to a convincing victory at the Birell Prague Grand Prix, confirming his status as one of the world’s most promising distance runners by coming within two seconds of the world record at the IAAF Gold Label road race on Saturday (8).

His winning time of 26:46 is the second-fastest 10km performance in history behind Leonard Komon’s 26:44 world record from 2010. It also improves on the world U20 best of 27:08 set by Kipruto himself earlier this year.

Knowing the course is conducive to fast times, having played host to Joyciline Jepkosgei’s world record from last year, the elite men’s field set off at a brisk pace. After just the first few kilometres, the lead pack was being whittled down with each passing minute.

Clearly unsatisfied with the half-way split, Lagat noticeably increased the pace, stringing out the lead pack. Within the course of the next kilometre, Kipruto had forged ahead of the pacemaker with Koech the only athlete capable of going with him, but not for long.

By six and a half kilometres, the chase pack was about 12 seconds adrift of Koech. Kipruto, meanwhile, continued to press ahead and open up a significant gap on Koech.

The teenager reached eight kilometres in 21:31, suggesting a finishing time within 27 minutes was possible. He glanced back but by now no one else was in sight.

As Kipruto reached Stefanik Bridge, knowing he had less than a kilometre to go, his cadence increased again, lifted by the support of the spectators. A sub-27-minute was a near certainty now and it was clear he had one eye on the world record. He moved into his top gear as the finish line came into view and crossed the line just shy of his target, but he was still visibly happy with his winning time of 26:46.

While many of the athletes who featured in the lead pack at half way struggled in the final few kilometres, Koech held on to second place in 27:18. Mathew Kimeli ran a smart race to place third in 27:26 with Kipyatich taking fourth place in 27:38, two seconds ahead of Lagat, the pacemaker.

“I’m very satisfied,” said Kipruto, who won the 10,000m at the IAAF World U20 Championships two months ago. “I was the only one pushing it. No one assisted me to push it.”

In contrast to the men’s race, the women’s contest featured three main protagonists for the duration of the 10km run.

Fancy Chemutai, who was the runner-up in Prague last year in 30:06, the second-fastest time in history, was keen to go one better this time. Joined by compatriots Caroline Kipkirui and Diana Kipyokei and helped by a couple of male pacemakers, Chemutai and her teammates reached the half-way point in 14:48, suggesting a sub-30-minute finishing time – or possibly even a world record – was possible.

Little more than a kilometre later, Chemutai had opened up a gap on Kipkirui and it continued to grow over the next two kilometres.

In the closing stages, though, Kipkirui and Kipyokei reeled Chemutai back in and they crossed the Stefanik Bridge together with Kipkirui now looking the freshest of the trio. Kipkirui, who has turned in a host of impressive performances on the track and roads this year, kicked ahead in the closing stages to win in a lifetime best of 30:19.

Kipkirui’s winning time moves her to fifth on the world all-time list, one place ahead of Paula Radcliffe, whose best of 30:21 was still the world record up until April 2017.

For the second year in a row, Chemutai had to settle for second place, clocking 30:22. In third, Kipyokei smashed her PB with 30:23.