Worknesh Degefa produced the third-fastest time ever witnessed at the Sportisimo Prague Half Marathon on Saturday (28), running a PB of 1:07:14 at the IAAF Gold Label Road Race.

Degefa led an Ethiopian one-two, winning from Yebrqual Melese who crossed the line in 1:08:21. Diane Nukuri of Burundi was third in 1:09:33.

In the men’s contest, Daniel Wanjiru stormed to his first major career win, running a personal best of 59:51. The 22-year-old Kenyan was followed across the finish-line by two compatriots who also ran faster than an hour. Wilfred Murgor finished second in 59:57, just edging out Leonard Komon who was given the same time.

Five women formed an initial lead group, covering the first 5km within 16 minutes, but only three were left as they passed through 10km in 31:56, suggesting a sub-68-minute finishing time.

Degefa, Melese and their Ethiopian compatriot Afera Godfay had already dropped Lucy Kabuu. The Kenyan, the fastest in the field with a PB of 1:06:09, had indicated before that she might not be in top shape after the loss of her father.

Before long, Godfay was also unable to hold on to Degefa, and then Melese began to struggle. Shortly before the 15km mark, 24-year-old Degefa, who had won last year’s Lisbon Half Marathon, was all on her own.

Degefa hit 15km in 48:11 and then increased her pace, covering the next 5km section in 15:39. She maintained her speed to the end, crossing the finish line in 1:07:14; a time that only two-time winner Joyce Chepkirui has ever beaten in the Czech capital.

Of performances achieved on record-eligible courses, Degefa now moves up to fourth on the Ethiopian all-time list.

But despite improving her personal best by 35 seconds and achieving the fifth-fastest time in the world this year, Degefa had hoped for more.

“My goal was to run a time between 66 and 67 minutes, but it was a hard race,” said Degefa, who finished second in Prague two years ago. “It was not only the tough competition but also the wind. And then there were sections of cobblestones which I found difficult to run on.”

Melese finished more than a minute behind in second place, while Nukuri moved up three places over the final three kilometres to finish third.

A fast pace soon developed in the men’s race as the pacemakers led a group of almost 20 athletes to a 10km split time of 28:08. They were on course for a 59-minute finish and even the course record of 58:47 seemed possible. But the windy conditions finally started to take its toll.

At 15km (42:44) the projected finishing time was suddenly outside 60 minutes. It was between 16 and 17km when Kenya’s Nicholas Bor began to push the pace. Defending champion Peter Kirui and 2014 Mattoni Olomouc Half Marathon champion Geoffrey Ronoh were suddenly unable to keep up.

Wanjiru and Murgor, who had only arrived in Prague on Friday afternoon after an arduous two-day trip from Kenya, were following Bor while Komon briefly trailed. The 10km and 15km world record-holder managed to close the gap, but when Wanjiru pushed again, Komon was beaten and only Murgor could hold on for another kilometre.

Shortly after the 20km mark, Wanjiru’s relentless pressure finally steered him clear and he went on to finish in a PB of 59:51.

“The line-up here in Prague today was so strong that it felt like a championship race, it was really tough. I learned a lot in this race,” said Wanjiru, who was third in Prague a year ago with 59:59 and then impressed with a second-place finish earlier this year in Ras Al Khaimah. “This victory gives me great motivation for the future.”

After regaining second place with a few hundred metres to go, Komon then just missed out on the runner-up spot, beaten by Murgor. But he was not disappointed with his race: “This was an interesting race and a great competition,” he said. “Everyone was really in good form. It is my first time in Prague and coming in third is fine for me.” 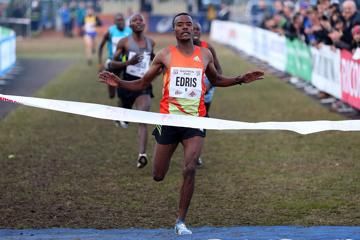 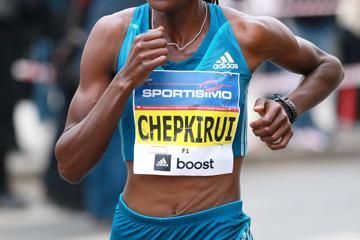