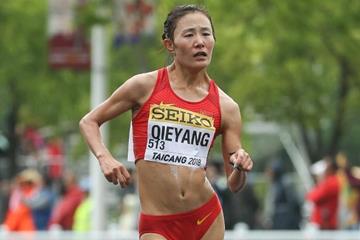 World No1 ranked Qieyang Shijie emerged victorious from a deep field to win the women’s 20km title while Wang Kaihua won the men’s 20km event to complete a Chinese double at the 2019 IAAF Race Walking Challenge meeting in the Chinese city of Taicang on Saturday (11).

As the race also served as China’s national trials for the IAAF World Athletics Championships Doha 2019, most of the country’s best race walkers entered the annual event with world silver medallist Lv Xiuzhi being the only exception following her last minute withdrawal for family reasons.

The women’s race was dominated by Chinese race walkers from the gun to the finish, with world record holder Liu Hong, reigning world champion Yang Jiayu and Qieyang taking turns in seizing the pole position.

The Chinese trio led the race until the final two kilometres before the 28-year-old Qieyang outraced her two compatriots to break the tape in style in 1:28:00.

It was the fifth time Qieyang competed in Taicang and her first to step onto the top of the podium.

“I always want to prove myself,” said Qieyang, who finished second at the 2012 Olympic Games, 2018 Asian Games and twice at the IAAF World Race Walking Team Championships. “Although being able to finish second in different major competitions is quite awesome too, I really need to prove that I can be the champion, especially when competing with such a quality field.”

“I take every race as my last race. Today’s race was quite hard as I know both Yang and Liu are in a very good form. But I also have trained hard and am in a good form. I believed I can win the title,” Qieyang added.

Since the 23-year-old Yang can enjoy an extra berth at the World Championships in Doha as the defending champion, Wang Yingliu, who finished fourth with a 1:29:58 clocking, can also make her way onto the national team squad.

The rhythm of the men’s race staged earlier in the morning was also controlled by Chinese athletes. The 25-year-old Wang Kaihua held off a strong challenge from Olympic silver medallist Cai Zelin to claim the title in 1:19:48.

It is Wang’s fifth outing in Taicang and his first win after finishing second at the World Race Walking Team Championships here last year and at the 2015 edition of the event.

Wang’s winning mark was 47 second shy of his clocking set when taking the victory at the Chinese National Race Walking Grand Prix two months ago in Huangshan and further shy of his personal best of 1:17:54 registered in 2017.