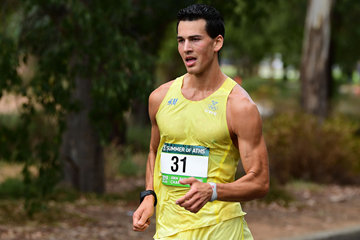 Sweden’s Perseus Karlstrom achieved a historic win while Brazil’s Erica de Sena confirmed her favourite status as they dominated the 20km on the opening day of the 2019 Pan American Race Walking Cup in the south-eastern city of Lazaro Cardenas for the fifth leg of the IAAF Race Walking Challenge on Saturday (20).

With a solid sub-four-minute kilometre pace for the last two two-kilometre laps, 28-year old Karlstrom became the first European man to take the 20km in the Mexican leg of the challenge, first held in 2003.

Spain’s European champion Diego Garcia finished second, ahead Carlos Sanchez, who kept the host country on the podium after his runner-up performance in 2018.

Karlstrom was happy to stay in the lead group of about 12 men as they reached the halfway point in 42:47. They maintained that pace until 14km, but with three laps to go the Swede sped up to 8:20 for the next 2km circuit and cemented his win with the fastest lap of the day: 7:43 between 16 and 18 kilometres.

He finished with another sub-eight-minute lap to cross the finish line across Lazaro Cardenas City Hall in 1:23:40, 19 seconds head of Garcia, his first podium finish in Mexico.

“I trained in high altitude and warm weather in Mexico leading up to this race,” Karlstrom told the local media in perfect Spanish. “I love racing here.”

Another pre-race favourite, Ecuador’s Andres Chocho, who has finished in the top three in his previous five races in Mexico, was never a factor halfway into the race and finished 17th.

Two European men preceded Karlström on top on the podium in Mexico, but over 50km: Norway’s Trond Nymark in 2005 and Slovakia’s Matej Toth at the 2010 World Cup.

Karlström is enjoying a great season so far. He won the second leg of the challenge in February in Australia with 1:20:05, his second best time and fastest since 2016.

In the women’s race Erica de Sena relived another South American duel with Peru’s Kimberly Garcia. They both moved to the front from the start and built an 18-second lead over the chase group, led by Spain’s European champion Maria Perez.

By the halfway mark, their lead increased to a minute and the duo extended it to almost 90 seconds by the time they reached 15km. That’s when De Sena started to gradually moved away from Garcia.

The Peruvian remained in close contact in the final lap, but De Sena never slowed down to win in 1:29:22, 11 seconds ahead of her closest rival.

In a European battle for bronze, Perez prevailed over Portugal’s Ana Cabecinha to secure a spot on the podium. In her first race in Mexico, Perez finished in 1:31:11 and the latter followed nine seconds later.

De Sena, the 2017 challenge winner, enjoyed her first Pan Am Cup victory eight years after her debut in Colombia.

Mexico and Ecuador shine in U20 races

The host country celebrated the first win of the day by 16-year old Cesar Cordoba Fernandez in 41:08, a personal best and 16 seconds faster than his world U20 leading time in Podébrady, Czech Republic, two weeks earlier.

The competition ends on Sunday with the 50km race for both men and women, starting at 7:30am local time.