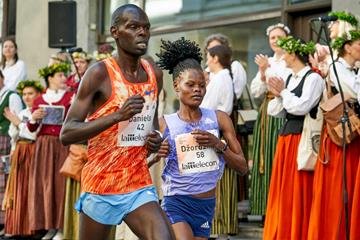 Both the men's and women's race records were broken at the Lattelecom Riga Marathon, an IAAF Bronze Label road race, on Sunday (20).

Ayana Tsedat of Ethiopia broke from Kenyan Silas Kiprono Too over the final two kilometres en route to his 2:11:00 victory while Rono, the pre-race favourite on the women's side, had just her pacesetter for company for most of the contest, eventually winning in 2:28:22.

The previous women's mark, 2:31:22, was set last year by Bekelech Bedada Daba of Ethiopia. The previous record of 2:11:45 was set by Kenyan Dominic Kangor Kimwetich in 2016.

Rono, 34, was the clear class of the women's field, building a two-second lead by five kilometres, and extending it to 11 at 10, reached in 33:47. She clocked 1:11:31 at the midway point, nearly a minute-and-a-half clear of her nearest competitor. When she reached the line, she was more than four minutes ahead of runner-up Ethiopian Tigist Teshome. It was Rono's fastest performance since 2014 and the fourth fastest of her career.

The men's race was a three-man battle between Tsedat, Too and Joseph Kyengo Munyoki, who were all well within race record pace at the halfway point, reached in 1:05:09. They ran together for nearly 14 more kilometres when Munyoki began to drift back as they approached kilometre 35. At that point the leaders forged on nearly stride-for-stride until the 22-year-old Tsedat made his move. Too couldn't respond but held on for second, clocking 2:11:13.

Further back, Munyoki won the battle for third, reaching the line in 2:13:10, comfortably ahead of Evan Barkovet Kiplagat, who clocked 2:13:57.

A record 37,645 participants from 78 countries participated throughout the weekend.