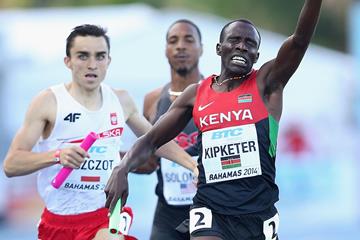 Alfred Kipketer of Kenya celebrates as he crosses the finish line ahead of Adam Kszczot of Poland to win the Mens 4x800 metres relay during day one of the IAAF World Relays (Getty Images) © Copyright
24 MAY 2014 Report Nassau, The Bahamas

Kenya became the first gold medallists at the inaugural IAAF World Relays when they took the men’s 4x800m final in emphatic fashion, crossing the line in 7:08.40 and taking the US $50,000 first place prize money.

The Kenyan quartet made an obvious attempt at the world record, which has stood at 7:02.43 to another Kenyan squad since 2006, and led from gun-to-tape.

Ferguson Rotich leapt into a 10-metre lead at the end of the first lap, covered in 50.70.

Rotich then struggled on the second lap before handing off to Sammy Kirongo as Kenya reached 800m in 1:46.00.

Kirongo's first lap of 50.40 only extended Kenya's lead but again he slowed over the second 400m; 1600m was passed in 3:31.70 and the world record was clearly beyond their reach.

Things got rougher for the Kenyans on the second half of the race, however, as their pacing became more ambitious: 50.00 was the first 400m for Job Koech Kinyor on Kenya's third leg, but he came back in 57.90 and handed off to Alfred Kipketer almost at a walk.

The race that unfolded behind them was almost as exciting, with the lead shifting between the USA, Spain, Australia and even, briefly, Bermuda.

At the close of the third leg, Brandon Johnson and Marcin Lewandowski, of the USA and Poland respectively, handed off almost in unison to Duane Solomon and Adam Kszczot.

Only Kenya, the USA and Spain missed out on national records in the men's 4x800m final.