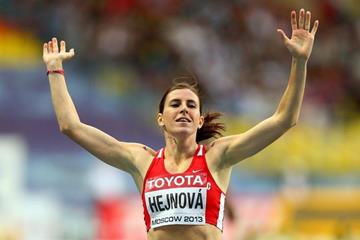 It wasn’t so much of a surprise that Zuzana Hejnova won the 400m Hurdles final; it was more the margin of victory that was the biggest shock of the race.

Hejnova continued her 2013 winning streak and dipped well below 53 seconds for the first time in her career to once again break her own Czech record. The rest of the field, meanwhile, finished outside 54 seconds.

The other surprise about the race was that it wasn’t Britain’s Perri Shakes-Drayton who crossed the line behind Hejnova; instead it was US champion Dalilah Muhammad, followed by Lashinda Demus, the defending World champion.

Demus in lane four was among the first to rise along with Muhammad in lane six and Shakes-Drayton in five as they all went out hard in the first half. Hejnova, running in lane three and with her main opponents in sight, had a slightly more conservative start, wanting to hold back enough for her trade mark finish.

On the top bend, the two US runners were still to the fore as Hejnova began to make her move. She charged down the home straight and stopped the clock in a world-leading 52.83, smashing her PB by almost a quarter of a second.

Muhammad finished best of the two US finalists, but was still 1.26 seconds behind the winner, clocking 54.09 for silver with Demus holding on for bronze in 54.27. Not since 2001 has a time outside 54 seconds been enough for a medal at the World Championships. It was also the biggest ever winning margin in the event.

Shakes-Drayton, who hit a hurdle in the second half of the race, faded badly down the home straight and wound up seventh in 56.25. Ukraine’s Anna Titimets finished almost half a second behind Demus in fourth, followed by Shakes-Drayton’s team-mate Eilidh Child, who clocked 54.86.

The other Ukrainian athlete, Anna Yaroshchuk, finished fifth in 55.01 while Jamaica’s Nickiesha Wilson was some way back in eighth in 57.34.

Hejnova won her country’s first gold medal in a sprint event at the World Championships, while it was the third time that the USA managed to get two athletes on to the podium.

It was something of redemption for Hejnova, who went to Daegu two years ago as the second-fastest woman in the world but finished just seventh in the final. So perhaps Shakes-Drayton, the second-fastest entrant for Moscow, can take some solace from that.