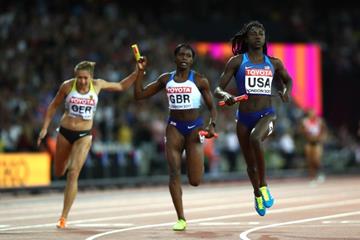 Tori Bowie took her second gold medal of the IAAF World Championships London 2017, anchoring the USA 4x100m team to victory in a world-leading 41.82, as they regained the crown that they last secured in Daegu six years ago.

In second, clocking 42.12, were Great Britain and Northern Ireland, the Olympic bronze medallists going one better than in Rio in front of an appreciative home crowd, while Jamaica, the champions in 2013 and 2015 but shorn in London of their double Olympic champion Elaine Thompson, took third in 42.19. The Beijing Olympic Games in 2008 was the last time they didn’t occupy one of the top two spots in a sprint relay at a global championships.

Germany, who had looked so impressive in winning their semifinal earlier in the day, finished fourth, just as they did in Rio in 2016. Their 42.36 in the final was quicker, though, than the 42.34 they set in the morning session.

In the race, the USA was in control from the start.

Bowie for Ariana Washington on anchor was the only change to their semifinal line up, allowing Aaliyah Brown to produce another accomplished first leg, with only Britain’s Asha Philip reacting quicker to the gun.

On the night in the South Korean city when the USA last won world gold, Allyson Felix was second in the order, a role she resumed here in London as she claimed her third world 4x100m title. The sight of the 31-year-old flying down the back straight is one that fans have become accustomed to over the years and this was a textbook example of Felix at her best.

Britain’s Desiree Henry, the 2011 world U18 200m champion, also produced a strong back straight, although her run followed a very stretched exchange with Philip, meaning that the 21-year-old had some ground to make up.

Britain’s second change wasn’t much better, Dina Asher-Smith misjudging the pace at which Henry was approaching, allowing the USA to gain a metre or so through a better pass between Felix and Morolake Akinosun.

Into the straight, Asher-Smith handed off to Daryll Neita towards the front of the exchange box, while Bowie took the baton late, which momentarily created the impression that Britain were closing in.

The individual 100m champion Bowie, however, was never likely to be overhauled and she finished the job expertly, easing over the finish line a picture of relaxation. Neita appeared also to throttle back when she realised gold was out of her grasp, allowing Jamaica’s Sashalee Forbes to close in.

In truth though, Jamaica, who changed both their running order and their line-up, bringing Simone Facey in to replace Christania Williams, were never in contention and did well to hold off a determined Rebekka Haase on fourth leg for Germany.

Felix, a veteran of six sprint relay teams at global championships, was understandably pleased to secure another win.

“Every moment I am on these relay teams is a privilege,” she commented. “I have the best time and just enjoy it. It was a great finish by Tori but every one of the team performed fantastically.”

Bowie agreed: “We are on top of the world. I am grateful to be able to run and bring these ladies home to the gold. It has been a mixed week but two gold medals is amazing for me.”

The British team was also thankful to make it on to another podium after a successful two-year period in which they have challenged for medals.

Neita was satisfied with silver. “We've smashed it,” she said. “We worked so hard for this. I tried my best down that last stretch and I'm glad to bring the team home to silver. We work so hard as a team so we are delighted.”

Asher-Smith concurred and acknowledged the impact of the home support.

“To upgrade from Olympic bronze to world silver with these girls has been absolutely incredible, and to do it at home means so much,” she said.

“Thank you so much to this incredible crowd. What a lift they gave us. We are so proud to win the medal in London.”