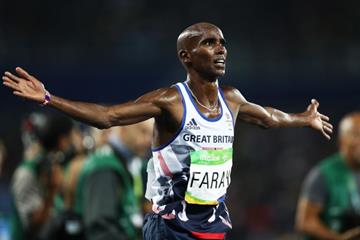 Mo Farah of Great Britain joined the ranks of men who have successfully defended their 10,000m title, running 27:05.17 for the win on Saturday night.

Farah, who has won every global title on offer at this distance and is unbeaten over 25 laps of the track since 2011, took a tumble at halfway when an accidental clip from his sometime training partner Galen Rupp saw him sprawled out in lane two.

He bounced to his feet immediately and gave Rupp a thumbs-up when Rupp came back to check on him.

“I thought about all my hard work, and that it could all be gone in a minute," Farah said afterwards. "I wasn’t going to let it go. I got up quickly."

The mishap immediately drew comparisons to Lasse Viren’s near-disastrous fall in the 1972 final in Munich, but Farah’s position was never so precarious as that of the Finn. Farah spent the early going loping at the back of the pack as a rotating cast of faces took turns at the front.

He only moved up when, in the third kilometre, Ethiopia’s Tamirat Tola and Yigrem Demelash took the pace up a notch.

Within a few laps it became clear that Tola and Demelash were working together to force the pace. Each would take a turn at the front, pushing, then letting the other take over as their own effort flagged.

The Kenyan duo of Geoffrey Kamworor and Paul Tanui shadowed the Ethiopians, apparently understanding the plan but not ready to take their turn at the front right away.

It wasn’t until the second half of the race – not long after Farah’s tumble, which happened out of view of the five at the front – that the Kenyans took a shift in the lead.

From 1000m to 5000m, each kilometre got faster, but the sixth slowed slightly as the Ethiopian duo began to run more cautiously.

Tanui turns up the pressure

Tanui then took the lead and, as Kamworor tailed him, their teammate Bedan Karoki also came up to the front and the pace began to ratchet down again as the Kenyan trio controlled the tempo.

Demelash, who looks uncannily like two-time Olympic champion Haile Gebrselassie, and Tola both took turns at the front as Kamworor, the reigning world half marathon champion and 10,000m silver medallist at the IAAF World Championships Beijing 2015, surprisingly started to slip back.

Finally, Farah asserted himself in the last kilometre. If the plan had been to run the speed out of his legs, it had not been successfully carried out by any of his East African rivals.

Farah moved to the front with a sharp burst of acceleration and, once in front, it became clear he had no plans to relinquish pole position.

Tanui tried once to retake the lead and was met with an abrupt surge from Farah, forcing Tanui to stay outside him.

At the bell, five men were in contention for the medals, with Farah leading and accompanied by Tanui, Tola, Demelash, and Rupp. Uganda’s Joshua Cheptegei, who had almost tripped over Farah when the latter fell, was trying but failing to stay in contact.

On the backstretch of the final lap, Tanui tried again for the lead and suddenly, as both men became fully committed to the sprint, the pack scattered like a pile of leaves on a breezy day.

Farah couldn’t overhaul Tanui again until the home straight, where he finally hit his top gear and pulled to the front.

Eyes wide, he sprinted madly for the line and finally shook the persistent Kenyan off in the last 50 metres.

“It is never an easy thing when you know you have got a target on your back," he said. "When I fell down, for a moment I thought my race was over, my dream was over but then I managed to dig deep.

“I promised my daughter Rhianna I was going to get her a medal and I was thinking ‘I can’t let her down’. That is all I was thinking about – her. That is why I was quite emotional at the end because it almost went.

“As each lap went down, I was getting more and more confident," he added. "With the bell, I was thinking ‘just don’t waste too much energy’.

"I didn’t know what some of the others could do so I just wanted to make sure I had something at the end. For me, one of the things that keeps me going is winning medals for my country and making my nation proud.”