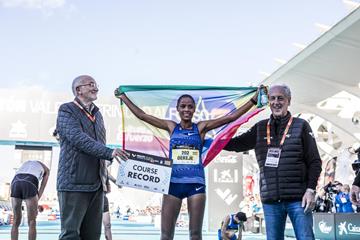 In the women’s race Dereje clocked 2:18:30 to move up to No. 8 on the all-time world list while pulling the next three finishers under 2:19, the first time four women have broken that barrier in the same race.

In the men’s contest the 26-year-old Alayew clocked 2:03:53 in his debut over the distance to finish 38 seconds inside the previous Spanish all-comers record set at this race last year.

The early pace in the women’s race was ambitious with Kenya’s Purity Rionoripo plus the Ethiopian pair of Workenesh Edesa and Dereje going through 10 kilometres in 32:33. Meanwhile, pre-race favourite Vivian Cheruiyot proved to be a bit more conservative but even so the Kenyan ace clocked 32:47 running with Ethiopia’s Birhane Dibaba.

Cheruiyot and Dibaba caught the leading pack at 15 kilometres (49:12) before reaching the half in 1:09:18, well inside the race record schedule with Ethiopia’s Azmera Abreha, a 2:21:51 performer, running alone another 22 seconds behind.

The leading quintet covered 30 kilometres in 1:38:36 while behind them Abreha cut their lead to nine seconds. Shortly afterwards, first Rionoripo and then Edesa began to drift back and were easily overtaken by Abreha.

At 40 kilometres, Dereje lead in 1:55:04 alongside Dibaba, with Cheruiyot one second adrift and Abreha, who finally joined the trio, for company. From there, Dereje began to step up her pace to open a sizeable margin on Cheruiyot and Dibaba. But Abreha kept up the pressure.

Dereje, who managed her second victory on Spanish soil this year following her 1:06:01 career best to win the Barcelona half marathon in February, said, "I love the city of Valencia and its course. I'm doubly happy as I broke the race record and also improved my career best."

The men’s race was nearly as impressive, with the top-four all dipping under 2:05.

Boosted by a triumvirate of pacemakers in the guise of Kenyans Bernard Ngeno, Victor Chumo and William Wanjiru, the men’s opening splits were fast as well with the large leading group going through the five and 10-kilometre points in 14:36 and 29:15 respectively. All the main favourites – Kenya’s Emmanuel Saina and Philemon Kacheran plus Ethiopia’s Leul Gebrselassie and Gude Ayola among others – were running together in almost ideal conditions, 15C and very slight winds.

A large group of ten – pacesetters aside – led by Saina, Kacheran and Adola reached the half in a promising 1:01:58, well on schedule to break the race record of 2:04:31 set last year by Gebrselassie. By then Turkey’s Kaan Ozbilen and Norway’s Sondre Moen were still in the leading pack, targeting the 2:05:11 European record. Surprisingly, Ethiopia’s Alayew was in the pack as well in first appearance over the 42.195km distance, likely boosted by his 1:00:13 half marathon career best set in Copenhagen in September.

But that demanding rhythm soon whittled down the pack. Saina and Ethiopia’s Tsegaye Kebede were the first to fall, and shortly after the 30-kilometre point (1:28:20) defending champion Gebrselassie dropped out of contention. By 35 kilometres, the lead pack was composed of Ethiopians Abebe Negewo Degefa, Alayew, Guye Adola, Kenya’s Kacheran and Turkey’s Ozbilen.

The 26-year-old Alayew broke the tape in 2:03:53 while Ozbilen clocked 2:04:16 to clip nearly a full minute from Mo Farah’s European record and lower his previous best by 1:11. Adola completed a quality podium at 2:04:42 with Degefa next in 2:04:5, improving his career best by two minutes.

"I knew that my time to make the marathon debut has already come," Alayew said. "I had a lot of confidence on my chances as the training sessions had gone really well."