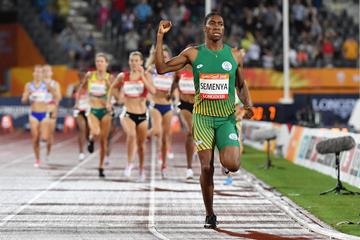 Caster Semenya took the first step towards a Commonwealth middle-distance double --and added to South Africa’s already impressive showing-- with a commanding victory in the 1500m on the third day of Games competition in Carrara Stadium.

Moving up on the leader’s shoulders near the bell, Semenya crunched out a 60-second final lap to cruise to victory in 4:00.71 ahead of Kenya’s Beatrice Chepkoech and Melissa Courtney of Wales.

Chepkoech and Australia’s Linden Hall had shared the lead through a solid first three laps in 3:16.23, but neither could produce the change of pace which might have made life harder for the winner.

Semenya now turns her attention to the 800m, in which she will start overwhelming favourite.

After disappointment in both 100m sprints, Jamaica bounced back on day three of the Commonwealth Games with gold medals in the men’s 110m hurdles and the women’s triple jump.

Not just gold medals, either, the Caribbean sprint powerhouse took first and second in both events to restore some lost pride.

Weather notwithstanding, it was a bright session for the Caribbean with Lindon Victor winning the decathlon to make it three out of the six gold medals awarded in able-bodied events.

Overall, Parchment came into the Games with a seeming edge over his teammate. A sub-13 seconds hurdler – best of 12.94 – he has been a finalist at the past two world championships, taking the silver medal in Beijing 2015 and a bronze at the 2012 Olympic Games.

Hough, on the outside of the field powered over, and occasionally through, the hurdles to take third in 13.38, just nine-hundredths of a second short of Kyle Van Der Kuyp’s national record and the fastest by an Australian since 1996.

Hough likes the Commonwealth Games. He was fourth in Glasgow four years ago in a then personal best 13.57.

There was just one lead change in the women’s triple jump. Ricketts took the lead in the first round with a 14.52m effort; Williams waited until the last round and the second-last jump of the competition to snatch it back with a 14.64m. Before that she had alternated fouls with ever-closer efforts of 14.34m in round two and 14.37m two jumps later.

Thea Lafond made it a Caribbean sweep, taking the bronze with a jump of 13.92m. It was Dominica’s first medal of any kind in nine appearances at the Commonwealth Games.

Isaac Makwala turned a 400m which loomed as a tough battle with Grenada’s Bralon Taplin into something of a cakewalk, easing to the line to win in 44.35. He could easily have run a tenth or two faster as he spread his arms wide and eased off when victory was assured some 15 metres short of the line. Taplin finished fifth.

Baboloki Thebe made it a Botswana 1-2, taking the silver in 45.09 just ahead of Jamaica’s Javon Francis, 45.11. In fourth place was Muhammed Anas Yahiya, the first Indian runner to reach a Commonwealth one-lap final since the great Milka Singh won the 440 yards in Cardiff in 1958.

There seemed to be no way Damian Warner would not retain his Commonwealth title in the decathlon. The overnight leader, Warner was fastest in the 110m hurdles and held his own in the discus, but three misses at 4.50m in the pole vault brought up the dreaded no-height and zero points.

Grenada’s Lindon Victor, Canada’s Pierce LePage and Cedric Dubler of Australia moved up from 2-3-4 to 1-2-3. And when Victor went from 59.92m to 71.10m with his last throw in the javelin, the ninth event, that was where they stayed.

Victor took the gold medal with 8303 points, 132 clear of LePage’s personal best 8171. Dubler had to be content with the bronze medal at 7983, Australia’s first decathlon medal since Jason Dudley took a bronze in Melbourne in 2006.

New Zealand continued to enhance its reputation as a new throwing power when Julia Ratcliffe triumphed in a rain-affected hammer throw to take the gold medal.

Neither of the two favourites – England’s Rio Olympic bronze medallist Sophie Hitchon and Canada’s Jillian Weir – was able to produce a valid throw. Defending champion Sultana Frizell of Canada could produce only a 63.94m for fourth.

Glasgow 2014 champion Nijel Amos was fastest in the men’s 800m heats. The Botswanan ran 1:45.12 to defeat Australia’s Luke Mathews in the second of the three heats.

Kenyan pair Wycliffe Kinyamal and Jonathan Kitilit won the other two heats. The final will be on Thursday night (Australian Eastern Time).

Jamaican pair Anastasia Le-Roy and Stephenie McPherson were the fastest two in the women’s 400m semis, with Kenya’s Maximila Imali taking the third semi-final. The final is on Wednesday night.

With Elaine Thompson, Shaunae Miller-Uibo and Dina Asher-Smith heading the line-up the women’s 200m looms as one of the best events of the Games. All won their first-round heats, but it was Canada’s Crystal Emmanuel who had fastest time of the round in winning the first heat in 22.72.

Fastest in the men’s first round was world championships bronze medallist Jereem Richards of Trinidad & Tobago. His 20.33 in heat five just edged the 20.34 by Zharnel Hughes in the ninth and last heat.