Somikwo and Oigo beat the Baltic chill at Gdynia Half Marathon

Ben Somikwo of Uganda and Christine Oigo of Kenya were the winners of the third edition of ONICO Gdynia Half Marathon on Sunday (18).

Runing in chilly conditions on the Baltic Sea coast, Somikwo prevailed by one second after a sprint finish against Spain's El Hassan Oubaddi in 1:03:32. Joseph Mumo of Kenya completed the podium of this IAAF Bronze Label road race, reaching the finish in 1:03:53.

The pre-race women’s favourite Oigo led the race from gun to tape and, despite a strong challenge from her rivals in the closing stages, held on to win in 1:13:54, with her compatriot Ruth Matebo four seconds adrift, and Meseret Merine of Ethiopia a further nine seconds behind.

Despite clear skies, the conditions in the host city of the 2020 IAAF World Half Marathon Championships were not optimal for fast running, with temperatures hovering around the freezing point. The eight-man leading group, which formed soon after the start, started cautiously with the five-kilometre point reached in 15:09 and 10 kilometres in 30:32.

Soon after the halfway point, the pace quickened, and only five men were left in the front: the two-time defending champion Hillary Maiyo of Kenya, his less heralded countryman Joseph Mumo, last-year's runner-up Zelalem Mengistu of Ethiopia, Somikwo and Oubaddi.

This quintet continued together through the 15 kilometres, reached in 45:36, but after another two kilometres, activity began once again. With Somikwo in the lead for much of the time, the favoured Maiyo was suprisingly dropped, and soon after the same fate befell Mengistu.

The remaining three stayed together for another few minutes. Mumo was the first to yield, while Somikwo and El Oubaddi began their kick for the finish. It was fast and close, with Somikwo managing to hold on to his edge. The Spaniard finished a mere second behind, with Mumo timed in 1:03:53, the only one of the top men to record a personal best.

Mengistu and Maiyo followed closely taking fourth and fifth in 1:04:01 and 1:04:04, respectively. Marcin Chabowski, who had been dropped from the leading pack earlier, was the top Polish finisher in sixth with 1:04:53.

Oigo, runner-up in the previous two editions of the race, took the lead early and by the time she reached the five-kilometre point in 17:01, was already four seconds ahead of Merine and eight seconds ahead of Matebo.

The advantage continued to grow over the following stages. At 10 kilometres, Oigo was nine seconds ahead with 34:22, and increased it 17 seconds at 15 kilometres, reached in 51:58.

What looked like a runaway victory eventually turned into a close race. In the final kilometres, Oigo began showing signs of fatigue, repeatedly glancing back and looking less comfortable than she did earlier, while the two followers began to gain ground.

In the end, however, Oigo was just able to hold on to victory. Her time of 1:13:54 was slower than she ran in the previous two editions of the race, but was nonetheless pleased with the win after back-to-back runner-up showings.

Matebo pulled ahead of Merine in the final kilometre, taking second in 1:13:58, with the Ethiopian finishing in 1:14:07.

Finishing fastest of all was Viktoriya Khapilina. Well behind the top three for most of the race, the Ukrainian eventually finished a close fourth in 1:14:19 for a repeat of her position from last year. Following in fifth place, albeit well back, was the top Pole Agnieszka Gortel, with 1:16:31. 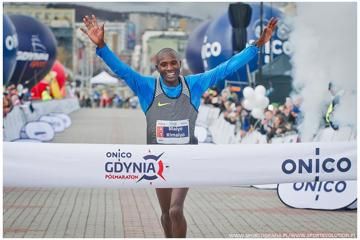 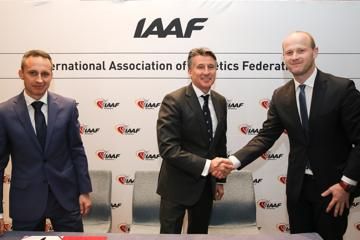