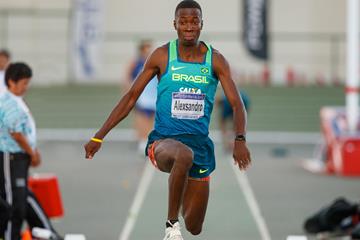 Melo reached 8.08m to take the long jump and 17.10m to win the triple jump to highlight Triple. The event was held on 1-2 February at the “Estadio Municipal” in Cochabamba, Bolivia (2560m of altitude).

Propelled at least in part by the city’s 2560m altitude, The 24 year-old Melo, nicknamed ‘Bolt’ for his physical resemblance of the great Jamaican sprinter, grabbed the control of Saturday’s (1) long jump competition with a 7.82m leap on his first attempt. He followed up with his winning mark of 8.08m in the second before rounding out the competition with four fouls. Melo was also dominant in the triple jump on Sunday (2). After a foul in the opening round, he leaped to 17.08m in he second to take command. Three fouls followed before he padded his lead by two more centimetres with an indoor personal best of 17.10m.

“Alexsandro was training, focusing on the World Indoor Championships,” said his coach Neilton Moura. “Even though it was postponed to 2021, we are very hopeful for the future with these results and the good training we achieved in Cochabamba.”

Venezuelan Leodán Torrealba was second in the long jump with 7.72m, while Brazilian Mateus de Sá took silver in the triple jump with 16.62m.

Gabriel Constantino, the 2019 World University Games champion and South American record holder in the 110m hurdles (13.18) and 60m hurdles (7.60), took the title in the sprint hurdles with 7.78, ahead of compatriot Eduardo de Deus (7.81). Argentina’s Agustín Carrera was third with a national record of 7.87.

Fernando Ferreira, silver medallist at the 2019 South American Championships, took the High Jump title with 2.25m, only one centimetre shy of his indoor personal best and national indoor record, recently set in Ostrava on 21 January. Venezuelan Eure Yáñez, the 2017 South American champion, was second with 2.22m.

In the pole vault, Argentine veteran Germán Chiaraviglio, a former world U18 and world U20 champion, claimed the victory with a 5.50m leap.

Brazilian Tiffani Marinho, the 2019 South American outdoor champion, won the 400m in a personal best of 53.34. Argentina’s Elián Laregina was victorious at the same event, setting a national indoor record of 47.52.