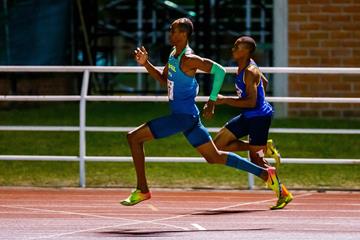 Brazil’s world U20 bronze medallist Alison Brendom Alves dos Santos produced one of the best performances at the 43rd edition of the South American U20 Championships in Cali, Colombia, on 15-16 June at the Estadio Pedro Grajales.

Dos Santos chose not to contest his specialist event, the 400m hurdles, and instead opted for the 400m flat. The 19-year-old won the one-lap sprint in a PB of 45.78, breaking the championship record.

It was yet another impressive performance for the young Brazilian, who set a South American U20 400m hurdles record of 48.84 in April and went on to win the senior South American title one month later.

It was just the second time in the 60-year history of the event that the South American U20 Championships had been held in Cali, and once again the 1005m altitude was a welcome ally for sprinters and jumpers.

Colombian 400m hurdler Valeria Cabezas added another gold medal to the one she won at last year’s Youth Olympic Games. She clocked a national U20 record of 57.10 to break the championship record and finish ahead of Brazilian duo Jéssica Moreira (57.28) and Chayenne da Silva (57.85).

Arnovis Dalmero provided another fine performance for the hosts by triumphing in the triple jump with a first-round leap of 16.52m (0.4m/s), the first ever Colombian victory in this event at these championships. Dalmero’s mark was also a national U20 record and erased the 24 year-old championship record (16.36m by Brazilian Gustavo Lima Pinto in Santiago de Chile).

The last championship record of the event was delivered by Peru’s Mary Luz Andia with her 47:10.20 victory in the 10,000m race walk.

Chile’s Claudio Romero, the 2017 world U18 champion and world U20 bronze medallist, won the men’s discus with a PB of 62.68m, just missing the South American U20 and championship record by 10 centimetres.