Several champions from 2017 added to their gold medal tally during the final two days of athletics at the Southeast Asian Games in Clark, the Philippines.

By the time the competition concluded on Tuesday (10), at least 22 national records had been set and seven games records were broken. 15 of the gold medal winners across the five days of action managed to retain their titles from two years prior.

In the women’s discus, Thailand’s Subenrat Insaeng opened with 53.63m, which would have been enough for the gold, but the 25-year-old landed a Games record of 60.33m with her fifth attempt to win by more than 13 metres. It was her fifth SEA Games title, having won her first at the age of 17.

Nguyen Thi Huyen and Quach Thi Lan achieved a Vietnamese 1-2 finish in the women’s 400m hurdles, clocking 56.90 and 57.39 respectively. They then teamed up with Nguyen Thi Oanh and Hoang Thi Ngoc to win the women’s 4x400m in 3:34.64. It was Thi Huyen’s third gold of the championships as she had won the 400m a few days prior.

Having won the 1500m earlier in the championships, Vietnam’s Duong Van Thai completed a middle-distance double by winning the men’s 800m in 1:49.91, repeating his achievement from 2017.

The men’s 110m hurdles provided the closest contest of the championships as the top two crossed the line together in 13.97. Clinton Bautista of the Philippines was eventually given the verdict over defending champion Rayzam Shah Wan Sofian of Malaysia.

Vietnam, hosts of the next Southeast Asian Games in 2021, topped the athletics medals table with 16 gold, 13 silver and nine bronze. Thailand (12 gold) and the Philippines (11 gold) were second and third on the table. 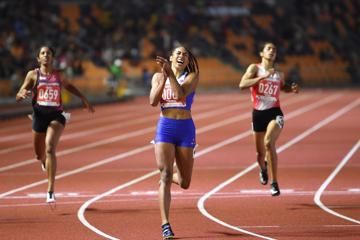