For the third consecutive year, the Standard Chartered Dubai Marathon was won by a runner making his debut over the classic distance with Ethiopia’s Tsegaye Mekonnen taking the plaudits at the IAAF Gold Label Road Race in 2:04:32 on Friday (24).

Amazingly, Mekonnen is just 18 years old. Although he had some reasonable performances on the roads in 2013, with a half marathon personal best of 1:02:53 and a fifth-place finish in the 5000m at the 2012 IAAF World Junior Championships, nobody was prepared for him to produce such a stunning performance.

He set a world junior best for the distance (the IAAF does not have a world junior record for the marathon), beating the previous mark by more than a minute, which had belonged to Kenya’s Eric Ndiema who ran 2:06:07 in the 2011 Amsterdam Marathon.

It was also the third fastest debut ever on a record-eligible course and Mekonnen was also just a tantalising nine seconds away from the Dubai course record set by his compatriot Ayele Abshero in 2012.

Completing an all-Ethiopian podium, Markos Geneti ran 2:05:13 for second place while Girmay Birhanu was third in in 2:05:49.

The men’s race began fast with split times inside the world record of 2:03:23 established by Kenya’s Wilson Kipsang in Berlin last September.

However, the pace started to drop as the temperatures rose above 20 degrees Celsius in the second half of the race. The slight change in tempo, from about 2:58 to 3:00 per kilometre, was enough for Kipsang’s world record to soon drift out of reach.

A group of nine runners was reduced to six shortly after the leading pack passed the 30km mark in 1:28:15.

It was at this point that Tamirat Tola surged ahead, and only Mekonnen and Geneti were able to follow their compatriot, although when Tola noticeably gestured that they should help him maintaining the pace they declined.

Mekonnen clearly had his own plans.

The teenager moved shortly after passing the 35km checkpoint, injecting kilometre splits of 2:51, 2:52 and 2:54 for the 36th, 37th and 38th kilometres and there was no way back for Geneti and Tola, who was passed by Birhanu in the closing stages of the race and finished fourth in 2:06:17.

“The pace was changing a lot during the first half, which was quite tough. I think I could have run faster with an even pace,” said Mekonnen.

“But I am of course very happy and proud of my performance. I had no idea about the world junior record, so this is a bonus for me.”

Seboka makes it a straight eight for Ethiopia

As expected, the women’s race was dominated by the Ethiopians as well and they took the first nine places, but it was Mula Seboka who upset the form book and beat the two favourites Meselech Melkamu and Meseret Hailu.

Seboka ran strongly from the gun, leading the big group of women more or less from the start.

For much of the race the pace was much slower than expected with a halfway split of 1:14:03. It was not until after the 35km mark that there was a significant surge, and again it was Seboka who initiated the attack.

Only Melkamu and Dado stayed with Seboka initially but Dado was dropped at 37km and then Melkamu lost contact just after 38km.

“When the three of us were together I thought Dado and Melkamu would be stronger than me, but at 37km I still felt strong and I realised that I have a chance,” reflected Seboka.

“They did not look that good anymore and I increased the pace again.

“I will partly use this to support my parents and some poor people back home. I will have to speak to my husband about what we will do with the other part of it,” she added, answering the inevitable questions about what she was going to do with one of the biggest first-prize cheques in the sport. 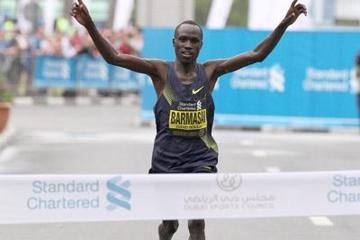 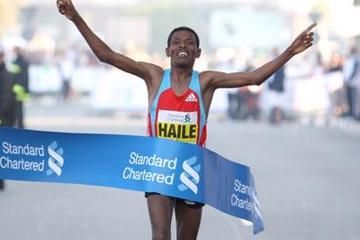 Gebrselassie fights off back pain and late ra... 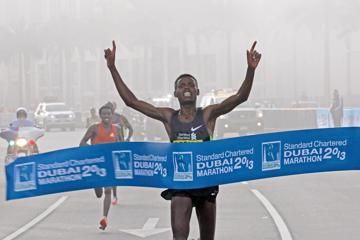