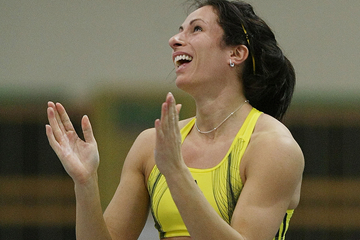 Olympic pole vault champion Jenn Suhr added a centimetre to her own world indoor record* when she cleared 5.03m at the Golden Eagle Multi and Invitational in Brockport, New York state, on Saturday (30).

Her previous world indoor record of 5.02m came in Albuquerque on 2 March 2013.

Suhr jumped her opening height of 4.60m on her second attempt, 4.82m with her first jump and then cleared the world indoor record height with her third effort.

Suhr added that one of the key factors in his wife setting the world indoor record was that she had been injury and illness-free since the summer, a rarity in her professional career.

“We have been setting personal bests just about every time," he commented. "We’re running on short runs, on long runs. We’re on the biggest poles of our lives. Jenn has just put it together. She has this event figured out.

"We’ve had incredible gains and this is only the tip of the iceberg. Jenn can jump much higher than she’s jumping right now. That’s the awesome part about it. She is nowhere near her pinnacle. She’s got a lot left.

"Track is under a lot of fire right now. We all know it’s for different reasons, but track and field, the pro and the world level needs something positive like this.

"Jenn has really separated herself from the whole crowd in the pole vault. Jenn can threaten a world record anytime, anywhere, and any place. That is the most exciting thing happening in track and field right now."

Suhr's next outing is expected to be at the New Balance Indoor Grand Prix in Boston on 14 February, the second of this winter's IAAF World Indoor Tour meetings.

*Subject to the usual ratification conditions