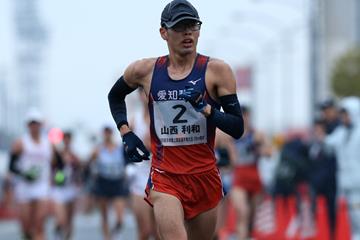 It was an island of dreams for Toshikazu Yamanishi at the 103rd Japanese National 20km Championships as he roared home to gold and a place in the Japanese Olympic team.

The world champion triumphed ahead of a stellar field to celebrate his 24th birthday the day before - and by a distance.

Previous editions in Kobe had been mostly cagey affairs, usually won by a grudging inch or two. But on a new 1km loop around Rokko Island at the southern end of the city, walkers spread out and saw times dip fractionally on previous years.

It probably owed a fair bit to the weather.

A slate grey rain demanded heavy coats and umbrellas on the sidelines. Many spectators wore medical masks, presumably to ward off the threat of Coronavirus.

‘Fresh’ said the forecast - decidedly chilly was nearer the truth. Walkers shivered on the start line, and many wore arm warmers.

However, the pace was white hot from the gun, incidentally kept inside a plastic bag by the starter until the last second.

They were lapping the back markers very soon, and by lap nine, the pack was halved to just three.

Yamanishi, Takahashi and Ikeda had clearly decided to take the race by the scruff of the neck.

Halfway saw 38:50 on the course clock, with Karlstom already 17 seconds down, desperately trying to get on the coat-tails of Noda and Ikeda.

On Lap 12 Yamanishi shook off his two shadows in an almighty rush.

In fact, his leg speed over the next circuits was phenomenal.

The hot favourite for the Olympic title in Tokyo appeared a blur through the mist and rain. But Takahashi with a slightly longer stride refused to panic.

He halved a 20m lead over the next 2km, and closed the gap entirely by three-quarter distance reached in 58:10.

However, the bespectacled Yamanishi wasn’t finished.

A lap later, and with a second wind, he stretched another lead over Takahashi to around 15 metres even though he had to lap back markers on the outside - and this time the gap proved decisive.

The leader had the luxury of looking round at every 500m turn over the last 3km to see all opposition disappearing in his wake as he splashed though a sizeable puddle at the end of each lap.

He took the tape just as he did in Doha at the World Championships, this time in 1:17:36 but in very contrasting conditions.

Yamanishi has lead World Athletics rankings for an incredible 47 weeks, and despite a lack of opposition and the cold, was only marginally outside his personal best, 1:17:15, set in the Asian Championships at Nomi last year.

He’s also the only walker to have gone under 1:18:00 on four occasions.

Behind him, Ikeda moved through the gears in the closing stages to come home a surprise second.

Karlstrom paid the price for a fierce early pace to finish overall third, nearly two minutes down on the winner - and a long way outside his PB, 1:18:07.

No doubt the Doha bronze medallist and 2019 Race Walking Challenge winner will reflect and adjust come the Olympics.

Poor Takahashi looked forlorn as he crossed for fourth, and third in the Japanese Championships. There was to be no sixth win in a row in a city where he has been unassailable.

In the women's 10kms, Kumiko Okada moved up from overall second in 2019 to take the title, and unlike the men’s race where the result was in doubt until 16km, the 28-year-old reigned supreme from the start.

Walking smoothly and wearing glasses like the men’s champion, Okada did justice to the gold number handed to the reigning champion.

She was exactly a minute ahead at halfway of the only two who might passably be called chasers, which Okada clocked in 44:33.

A distance behind, Kaori Kawazoe and Nadia Gonzalez were battling of the minor medals, but by 15kms the Mexican, walking as a guest, had to give way and slipped back through the field.

Okada was an encouraging sixth in Doha, and boasts a 1:27:41 national record set at La Coruna last year.

She crossed the line in 1:29:56, the only woman under 90 minutes, and was already giving interviews by the time Kawazoe battled the last 500m for a deserved second to finish in 1:33:15.

Behind her, it was anything but a grey day for Nami Hayashi.

The Japanese looked totally spent with head tilted and mouth open as she collapsed over the line, but equally shattered was her 1:38:55 PB, and by more than three minutes to take bronze just ahead of Serena Sonoda in fourth.