It was dubbed ‘Salute to a Legend’ and that’s precisely what the 35,000-strong crowd did after Usain Bolt won the 100m at the Racers Grand Prix on Saturday (10).

Minutes before the fireworks lit up the clear night sky, the multiple world and Olympic champion shared centre stage with sprint relay colleagues Jevaughn Minzie and Nickel Ashmeade in a sentimental and symbolic 100m race.

Bolt, competing in his season opener and his final race in Jamaica, showed signs of race rustiness early on, allowing training partner Minzie to get a jump start. However, midway he bolted into the fray, in his inimitable way, then zoomed away from the field for a comfortable win in 10.03 (0.2).

Incidentally, Bolt’s first ever international 100m race some 10 years ago produced the same time. It was, of course, almost half a second shy of his 9.58 world record from 2009, but having missed a block of training following the death of his friend Germaine Mason, Bolt wasn’t overly concerned with what the clock said.

“It was one of my worst races,” he said. “My execution wasn’t all that great. I wasn’t worried about the time; I just wanted to compete in front of my fans.”

IAAF President Sebastian Coe attended the meeting and paid tribute to a man who will leave an incredible lasting legacy in athletics.

“I am here just to thank someone who has changed the face of our sport, and has encouraged so many young people to our sport, and the journey now has to continue,” said Coe.

“This is an extraordinary career that is coming to a close and we are very excited, of course, that that career will close fittingly in a World Championships stadium. If you look at his record, everywhere and everything that he (Bolt) has done, he has always been the best.”

On a warm night for sprinting, the international men’s 100m held earlier in the evening provided an acid test for the contenders to the soon-to-be-vacated throne of the world’s fastest man. South African record-holder Akani Simbine, who has already bettered the 10-second barrier six times this season and won at the IAAF Diamond League meeting in Doha, found 2011 world champion Yohan Blake in a no-nonsense mood.

Blake rocketed out of the blocks and sped away from the field en route to a 9.97 (0.6m/s) victory, delighting the vociferous home crowd. Simbine took second place in 10.00 followed by Keston Bledman in 10.22.

“I’m in fantastic shape,” said Blake, who ran 9.93 in Kingston last month. “I didn’t want to run too fast and as you can see I shut it down early.”

Van Niekerk at his best

While the 100m races produced the biggest reactions from the crowd, the best performance of the night came from world and Olympic 400m champion Wayde van Niekerk.

A new men’s 200m world champion will be crowned in London for the first time since 2009 and Van Niekerk is among the likely successors. The South African offered a glimpse of the future with a world-leading 19.84 (1.2m/s) victory, breaking the national record in the process.

“This is definitely a positive step forward,” said Van Niekerk, who last week achieved the same time on a 200m straight in Boston. “I felt that I was in pretty good shape last week in Boston, I wanted to repeat that here.”

Jamaica’s Demish Gaye ran the race of his life in the 400m, upsetting Olympic fourth-place finisher Machel Cedenio and 2012 Olympic bronze medallist Lalonde Gordon by pulling away on the home straight to win in a PB of 44.73.

“My race plan was to get out and track Cedenio and Gordon and finish strong,” said an ecstatic Gaye. “I came out here to win and I’m now very confident going into trials.” Both Gordon (45.18) and Cedenio (45.57) registered season’s bests.

World champion Allyson Felix, running her first 400m this season, achieved a commanding win in a meeting record of 50.52. It was the first time Felix had won an individual event in Jamaica.

Levy and Nelvis impress over the barriers

World silver medallist Hansle Parchment and Olympic finalist Devon Allen were the more recognisable names in the 110m hurdles, but the relatively unknown Ronald Levy showed that he wasn’t there to simply make up the numbers.

Levy, who recently became the third-fastest Jamaican sprint hurdler in history following his 13.10 run at the IAAF Diamond League meeting in Eugene, validated his meteoric rise with a 13.17 (-0.7m/s) victory. He was trailed home by Allen (13.26) and Parchment (13.34).

Defending champion Sharika Nelvis was the best in the women’s 100m hurdles, winning in 12.78 (-1.4m/s) to complete a perfect five wins from as many starts in the Caribbean this season. World champion Danielle Williams (12.81) and 2012 Olympic champion Sally Pearson (12.83) rounded out the podium spots.

In the men’s 400m hurdles, USA’s Quincy Downing stormed to a surprising victory in a personal best 48.13. World U20 champion Jaheel Hyde was 0.69 in arrears with last year’s winner Johnny Dutch third in 49.00.

Two weeks after running a world-leading time over 5000m, five-time world champion Mo Farah carried his sublime form into Kingston, but he was made to work for his 3000m victory. The Briton increased the tempo on the bell lap where he surged past Australia’s Pat Tierman, crossing the finish line in a Jamaican all-comers’ record of 7:41.20. Tiernan was second in a PB of 7:41.62.

“The time wasn’t all that quick, but tonight wasn’t about a fast time, I just wanted to be here for my great friend Usain Bolt,” said the four-time Olympic gold medallist. “He’s a legend in my eyes.”

Kenya’s world and Olympic champion David Rudisha couldn’t find top gear in the 800m and was unable to stop compatriot Willy Tarbei from coming through on the inside. Tarbei, the world U18 champion, won in 1:44.86 to Rudisha’s 1:44.90, season’s bests for both.

“I think I need to work on my last 100 metres and get back my momentum,” said Rudisha. “I wanted to win for this fantastic crowd but I’m happy to be in Jamaica on this memorable occasion for Usain.”

On the infield, USA’s two-time world indoor champion Ryan Whiting won the battle of the strong men in the shot put with 21.11m, his best throw for two years. World bronze medallist O’Dayne Richards registered the same mark but lost out to Whiting on countback.

Two-time world and Olympic champion Christian Taylor was not tested in the men’s triple jump and was the only man to jump beyond 17 metres, winning with 17.20m. Shanieka Thomas-Ricketts won the women’s triple jump with 14.31m. 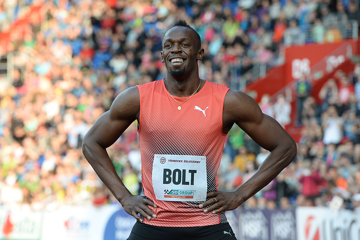