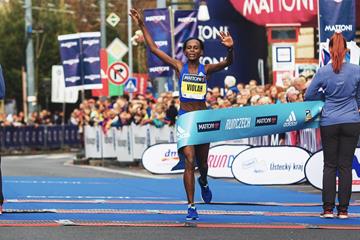 Violah Jepchumba returned to winning ways at the Mattoni Usti nad Labem Half Marathon, while Barselius Kipyego retained his title at the IAAF Gold Label road race on Saturday (16).

Both athletes broke the course records with Jepchumba chopping 71 seconds off the women’s mark and Kipyego shaving one second off the standard he set last year.

As she often does, Jepchumba set off at a fast pace and soon detached herself from the rest of the women’s field. Running alongside a few male pacemakers, she passed through five kilometres in 15:15 with a 17-second lead over Nancy Kiprop and Lucy Cheruiyot.

Jepchumba reached the 10-kilometre mark in 30:57, which suggested a finishing time close to 65 minutes. By 15 kilometres, reached in 46:38, Jepchumba’s lead over the Kenyan duo had increased to 50 seconds but her pace was starting to slip.

While her victory was never in doubt, as the 26-year-old Bahraini runner turned the final corner it soon became clear that she would narrowly miss out on breaking the 66-minute barrier. Nevertheless, her finishing time of 1:06:06 was a Bahraini record and a huge improvement on the previous course record of 1:07:17 set in 2015 by former world record-holder Peres Jepchirchir.

It also marked Jepchumba’s first victory since 13 January this year. Despite producing a string of stunning performances on the roads, including a 1:05:22 clocking in Prague, she had been beaten in her past four races.

“I wasn’t expecting to run 66 minutes, I was hoping for 67 maybe,” she said. “I’m very happy because I broke the course record.”

More than a minute behind, Kiprop and Cheruiyot continued battling to the end. 38-year-old Kiprop proved to have the stronger finish and got the better of her compatriot, crossing the line in second place in 1:07:22, just one second ahead of last year’s runner-up Cheruiyot. Both women were rewarded with big PBs.

Stacey Ndiwa was the only other woman to finish within 70 minutes, taking fourth place in 1:09:09. Summer and winter Olympian Eva Vrabcova was the top Czech finisher, placing seventh in 1:11:22.

Barselius Kipyego feels at home in Usti nad Labem. It was where, in 2015, he enjoyed his first big breakthrough, finishing second in 1:00:59. On his return to the Czech city last year, he smashed the course record by 83 seconds with a lifetime best of 59:15.

So on Saturday, in his third successive appearance at this event, he had no qualms in taking control of the race when he was unhappy with the job the pacemaker was doing.

A large lead pack had passed through five kilometres in 14:03, but Kipyego soon took control and led the field through 10 kilometres in 28:09 with 10 men remaining in the pack.

The 24-year-old Kenyan then upped the pace. By the time he reached 15 kilometres in 42:03, having covered the previous five-kilometre segment in 13:54, he had just two opponents remaining: Kenya’s Josphat Tanui and Tanzania’s Ismail Juma.

Less than eight minutes later, the Kenyan duo managed to drop Juma. Kipyego then broke away from Tanui with one mile to go, occasionally glancing at his watch to see if he was on course to break his own course record.

He timed his finish to perfection and sprinted towards the line to stop the clock at 59:14, exactly one second quicker than his winning time from last year.

“The pacemaker wasn’t the best, so I tried to push because I wanted to break my PB and the course record,” said Kipyego. “The course was very nice and the weather was good.”

Tanui, competing in just the third half marathon of his career, took more than a minute off his PB to take second place in 59:22. Juma, meanwhile, was rewarded with a Tanzanian record of 59:30 in third place.