Olympic discus champion Valarie Allman added 30 centimetres to her own continental record, throwing 71.46m at the Triton Invitational in La Jolla on Friday (8).

In so doing, the 27-year-old US athlete produced the farthest throw in the world for almost 30 years, elevating her to 15th on the world all-time list – and this was just her second competition of the year.

Allman, who opened her season last month with a 68.13m win in San Antonio, was in a class of her own in La Jolla. She opened her account with 65.51m, then produced her record-breaking throw in round two. After passing round three and registering a foul in round four, she ended her series with throws of 67.38m and 65.93m. US Olympian Rachel Dincoff was second with 61.27m.

Roughly 550km east in Tempe, Arizona, another leading US thrower was putting down big marks at the Sun Angel Track Classic.

Olympic finalist Brooke Andersen sent her hammer out to a world-leading 77.26m, within a metre of the 78.18m PB she set last year. She had opened her series with 76.89m before producing her winning mark in the fifth round.

World indoor silver medallist Mikiah Brisco led for most of the first half before Steiner and Favour Ofili came through in the closing stages. 19-year-old Ofili finished second in a PB of 11.00 while Brisco was third in 11.04, just ahead of her training partner Aleia Hobbs (11.08).

Later that day, Steiner lined up for her specialist event, the 200m. Despite a stiff headwind of -5.6m/s, she sped to a 22.38 victory, breaking her outdoor PB.

In other US-based action on Friday, Estonia’s Janek Oiglane won the decathlon at the Tennessee Relays in Knoxville with a lifetime best and World Championships qualifying mark of 8405. 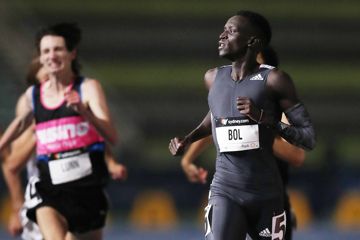