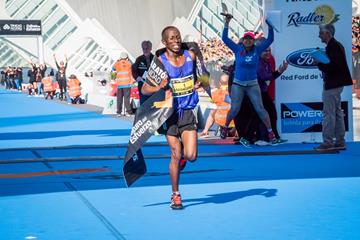 Kenya’s John Mwangangi will have plenty of reasons to remember his win at the 2015 Maraton Valencia Trinidad Alfonso on Sunday (15).

His time of 2:06:13 at the IAAF Silver Label Road Race was not only a personal best by more than a minute, but it was also his first win over the classic distance. He also ran the fastest marathon ever seen on Spanish soil.

“It’s fantastic to win this race,” said Mwangangi. "I’m in great form but I honestly didn’t expect to break the record by such a margin. Fortunately the weather was in our favour today; it was just perfect. Last year the wind annoyed me a lot. In addition, the work of the pacemakers has been fantastic. When I realised that a new record (2:07:14) and PB (2:07:28) was possible, I pushed hard and finally I managed the win."

Matthew Kisorio was second in 2:06:33 with Felix Kipchichir Kandie third in 2:07:07 to complete an all-Kenyan men's podium. The top three men all managed personal bests.

Right from the start, a triumvirate of pacemakers produced an even pace of three-minute kilometres in a clear bid for a time faster than 2:07.

The opening 10km was covered in 30:02 and the following 10km section was slightly faster, even though a large group of 16 men went past the halfway point in 1:03:01.

The pace stayed the same at the start of the second part of the race, although the leading group gradually began to shrink.

One of the first to fade was Eritrea’s two-time World Cross Country Championships medallist Teklemariam Medhin, who was making his debut at the event

The leaders reached 30km in 1:30:05 with seven men still in contention and the pace being driven predominantly by Kandie.

With 3km to go, only Kisorio, Mwangangi and Kandie remained in contention before Mwangangi broke away from his rivals with approximately 1400 metres to go, and he pressed on to win by 20 seconds.

Namibia’s Beata Naigambo also clocked a course record when she won the women’s race in 2:26:58, becoming the first back-to-back champion in the Mediterranean city since local runner Elisenda Pucurull won her third consecutive title in 1991.

Naigambo took three seconds off the previous course record set by Ethiopia’s Azalech Woldeselasse in 2013, running almost four minutes faster than she did in 2014.

Kenya's Janet Jelagat Rono was second in 2:27:34 with Morocco's Malika Asahssah third in 2:28:02. Like in the men’s race, the first three women all set personal bests.

Rono pulled away from the others early in the second half of the race but her advantage was more than 10 seconds. Coming from behind, Asahssah joined the chasing group which then caught Rono by 33km.

Shortly before the 40km mark, Naigambo managed to get rid of her pursuers although it was clear she was suffering over the final kilometre as she chased the course record.

Initially it seemed like she was going to miss the record, but a desperate final effort helped her achieve her goal.

“In addition to win again here, I also broke the course record so I can’t ask for more," said Naigambo. "Last year I had some problems with the supplies of water but this year everything was OK today."