Competing before a crowd of more 7000 at Accors Hotel Arena in the French capital, Hugues-Fabrice Zango shattered his own African indoor record in the triple jump at the Meeting de Paris on Sunday (27).

The African champion leaped 17.58m in the final round to eclipse the 17.23m mark he set in Val-de-Reuil exactly one year ago. The mark elevated the 25-year-old from Burkina Faso to 20th on the all-time indoor list. His mark is also superior to the African record outdoors, Moroccan Tarik Bouguetaib's 17.37m leap from 2007.

Conversely, the men's 60m couldn't have been closer. Indeed, Gue-Arthur Cisse of Ivory Coast and Ghanaian Sean Safo Atntwi were inseparable at the line, their times equal to the thousandth of a second. Each was credited with 6.60.

In another heated contest, Orlando Ortega won the 60m hurdles in 7.63, a scant 0.01 ahead of Aurel Manga.

Meanwhile, decathlon world record holder Kevin Mayer had a productive early evening, clocking 7.81 in the 60m hurdles, his second best performance ever, and topping 5.35m in the pole vault.

When a meeting has been named after you, it simply adds to the weight of expectation.

At the Karsten Warholm International in Ulsteinvik on Friday (25), Norway’s world 400m hurdles champion thrived on the added pressure as he took on three-time world indoor champion Pavel Maslak in the 400m.

He sped through the first lap in 21.53 seconds and extended his lead over his Czech rival throughout the second half, stopping the clock at 45.56 with Maslak finishing a distant second in 47.10.

Not only did Warholm shave 0.03 from his own Norwegian indoor record, it also moved him up from equal 10th to joint eighth on the European indoor all-time list.

Later in the competition, he teamed up with former world 800m record-holder Wilson Kipketer in a 4x200m relay – only for them, it was more of a 2x2x200m as they took it in turns to run legs. They ended up winning in 2:02.59.

European steeplechase bronze medallist Karoline Bjerkeli Grovdal won the 3000m by a similarly convincing margin in what was just her second indoor race of her career. Her winning time of 8:52.79 was just two-and-a-half seconds shy of the Norwegian indoor record set by distance legend Ingrid Kristiansen back in 1985.

Ukrainian high jumpers Kateryna Tabashnyk and Yaroslava Mahuchikh continued their rapid rise at the Miroslava Hubnerova Memorial in the Czech town of Hustopece on Saturday (26).

The pair trailed Alessia Trost and Michaela Hruba when the bar moved up to 1.94m, but Tabashnyk’s first-time clearance at that height moved her into the lead along with Britain’s Morgan Lake. Mahuchikh also got over it on her first try, while Trost needed three jumps and Hruba bowed out.

Tabashnyk was successful once again on her first attempt at 1.97m. Mahuchikh cleared it on her second attempt, as did Lake to equal the British indoor record.

On a roll, Tabashnyk sailed over 1.99m with another first-time clearance to maintain her lead. Mahuchikh needed all three attempts but finally cleared it to equal Vashti Cunningham’s world U20 indoor record and set an outright world age-17 best.

Tabashnyk ended her series with three unsuccessful attempts at 2.01m.

China’s Wang Yu won the men’s competition with 2.30m. He was one of seven men to get over 2.26m, but was the only athlete in the field to successfully clear 2.28m.

At the Razorback Invitational in Fayetteville on Friday (25), hurdles specialist Grant Holloway once again underlined his stunning all-round ability by winning the long jump and the 60m.

He was back on track 24 hours later to contest his first ever 60m race. After a 6.59 clocking in the heats, he sped to a world-leading lifetime best of 6.51 in the final.

The Swedish teenager had opened his season last weekend at the Pole Vault Summit in Reno, but only got over his opening height of 5.51m before exiting the competition with three failures at 5.71m.

But he was back to his usual self in Fayetteville. After opening with a miss at 5.46m, he cleared it on his second try and then got over 5.57m, 5.72m and 5.83m with his first attempts. He ended his series with three misses at 5.92m.

Just four thousandths of a second separated the top two women in the 200m. Kentucky teenager Abby Steiner was awarded the victory with 22.97 as all-rounder Payton Chadwick of Arkansas took second place with the same time.

Less than two years since the previous world indoor best was set for the rarely-run 4xmile, an all-US quartet teamed up to smash the mark at the Dr Sander Columbia Challenge on Saturday (26).

The Brooks Beasts were led off by David Ribich, who covered the first mile in 4:08.2, putting them outside the schedule required to beat the previous world indoor best of 16:12.81. Henry Wynne gave the team a fighting chance with a 4:01.4 effort on the second leg.

Brannon Kidder produced the fastest split of the day with his 3:56.8 run on leg three. It meant final leg runner Izaic Yorks needed to cover the last mile in 4:06.4 to achieve the team’s target. He easily surpassed that, clocking 3:57.2 to bring the team home in 16:03.68.

Not only is it the fastest indoor performance in history for the event, but it is also an outright North American record as it is quicker than the best outdoor time achieved by an all-US squad.

Payton Otterdahl is fast making a name for himself as one of the world’s leading shot putters.

But he improved on his outright PB in his first competition of the indoor season last month, throwing 21.31m. And he made another big step up at the Mark Colligan Memorial in Lincoln on Saturday (26).

After a foul in the first round, he sent his shot out to 20.80m in round two but improved on that in round five with 21.64m. It is comfortably the best mark in the world at this early stage of the indoor season and moves him to 21st on the world indoor all-time list.

Devin Dixon produced the standout performance of the Texas Tech Classic in Lubbock.

Contesting his first 800m race of the year, the 21-year-old passed through half way in a swift 50.53 and had a commanding lead by the time he reached 600 metres in 1:17.71. He maintained his pace on the final lap to cross the finish line in an outright PB of 1:45.27, moving him to third on the North American indoor all-time list.

The finish in the men’s 60m was as close as it gets. Cravont Charleston, Kasaun James and Andrew Hudson crossed the line in unison. The clock read 6.56, but it took a few moments to separate the trio.

It was eventually confirmed that all three had the same time down to the hundredth, but just one thousandth separated each of the three sprinters with Charleston given the victory ahead of James and Hudson.

World 4x400m silver medallist Wil London won the 400m in an indoor PB of 45.73, just getting the better of Bryce Deadmon, who also recorded a big lifetime best of 45.82.

Elsewhere in Clemson, Kendell Williams led the pentathlon from start to finish to win with 4490 from Aliyah Whisby’s 4372. 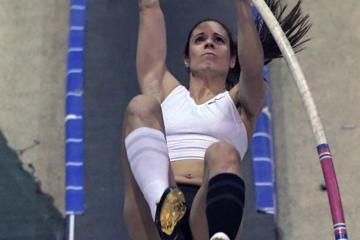