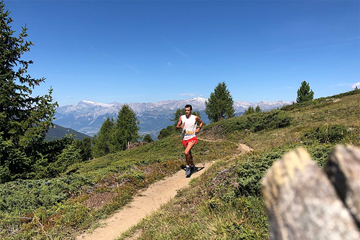 Spain’s Kilian Jornet and Kenya’s Lucy Wambui Murigi lived up to expectations in the third WMRA World Cup race of 2018, winning at the Sierre-Zinal race in the Valais village of Zinal, Switzerland, on Sunday (12).

Jornet, one of the biggest stars in the world of mountain running, won the race for the sixth time. He waited until after Chandolin, the first big ascent, before changing the pace and taking the lead, where he stayed for the rest of the race.

He completed the 31km course in 2:31:40, finishing 92 seconds ahead of his nearest challenger. Britain’s Commonwealth marathon bronze medallist Robbie Simpson was second in 2:33:12.

“It was a hot day, but I felt good and I tried to push hard in the second half,” he said. “Simpson put in a strong kick just after Chandolin, so I decided that was the right moment to make my move. The other guys today were very strong so I am really happy with my result.”

Simpson held off a strong challenge from Kenya’s fast-finishing Robert Surum to hold on to second place. Surum started slowly but made up significant ground in the latter stages to finish third.

“It was a good race for me,” said Simpson. “I didn’t suffer too much in the hot weather today. Running here in ZInal was superb as usual.”

With a fourth-place finish, Italy’s Francesco Puppi holds on to his lead in the overall WMRA World Cup standings.

Murigi, the world mountain running champion, retained her title and notched up her third win in Zinal.

In an impressive solo effort, the Kenyan sped away from her rivals in the early stages and her lead grew as the race went on. She eventually won in 2:57:55, more than three-and-a-half minutes ahead of her nearest challenger.

“I came here to attack the course record,” she said. “I tried and started fast, but unfortunately the hot weather made it impossible. I’m still really happy about my race, though.”

Germany’s Michelle Maier, the 2016 winner, finished second in 3:01:31, while Switzerland’s Simone Troxler surprisingly made it on to the podium in what was her first race on this course.