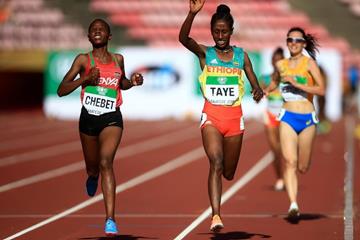 For all their success at U20 level at the World Cross Country Championships, a Kenyan woman – as implausible as it sounds – had never won the 5000m title at the World U20 Championships before today but Beatrice Chebet ended the decade-long Ethiopian hegemony of the event with an unmatched turn of pace in the last 150 metres.

Not since 2006 has a non-Ethiopian won this title but Chebet transferred her domestic form to the international stage superbly, covering the last lap in 62.66 to win the 5000m title in 15:30.77 on an unseasonably warm afternoon in Tampere.

Chebet was the runaway winner of the Kenyan U20 title earlier this year but she hadn't distinguished herself in her two prior international appearances. She just missed out on a medal in the 3000m at the IAAF World U18 Championships on home soil in Nairobi last year and she was a distant 10th at the African Cross Country Championships in Chlef, Algeria in March.

On that occasion, the Ethiopians dominated proceedings with Girmawit Gebregziabher winning both the individual title and leading Ethiopia to the team title. Gebregziabher was in today's race along with Ejegayehu Taye and they were tasked with maintaining Ethiopia's storied tradition in the event.

The Japanese duo of Tomomi Musembi Takamatsu and Miku Moribayashi made the pace respectable in the early stages but they drifted back into the pack before the 2000-metre checkpoint. Running three abreast at this point, the pace didn't pick up again until Taye put in a 71.87 lap – the first lap at sub-15-minute pace – through the 4000-metre checkpoint in 12:40.12.

This was followed by a 72.31 last lap and by the bell, which was reached in 14:28.11, the pack was reduced to the four principal pre-event contenders: the two Ethiopians and the Kenyan duo of Chebet and Hellen Lobun.

Despite leading the entry lists with a 15:16.53 clocking, Lobun was widely considered the second string Kenyan based on recent form and she suddenly fell out of contention with 300 metres remaining. While assured of a medal after Lobun’s sudden demise, Gebregziabher was the next to drop out of title contention, leaving Taye and Chebet to battle it out for the title.

Taye fought Chebet off until the last 150 metres when the 18-year-old moved hard around the outside to assume the lead. Working hard all the way to the finish, Chebet didn’t allow Taye to get back on level terms with her despite the latter expediently putting out an arm while crossing the finish line.

“Second feels bad,” said Taye. “I wanted first. The time was good and the team tactics were good. They worked but we still wanted the gold medal.”

Also making her European debut, Gebregziabher had to settle for bronze in 15:34.01.