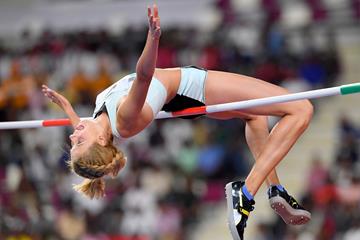 Yaroslava Mahuchikh broke the world U20 indoor record* in the high jump, topping 2.01m at the Demyanyuk Memorial High Jump meeting in Lviv, Ukraine, on Saturday (18).

In her 2020 debut, the 18-year-old, who sailed into prominence after taking silver at the World Championships in Doha last September, brushed the bar slightly but sailed clear on her third attempt to take sole ownership of the world U20 record of 1.99m she shared with Vashti Cunningham since 26 January of last year.

In what was largely an exhibition by the teenager, Mahuchikh topped 1.86m, 1.89m and 1.95m with her first attempts before topping 1.99m with her second.

Her 2.01m effort was an early season world lead and also equalled the national senior indoor record set by Vita Palamar in 2008 when Mahuchikh was just six years old.

Mahuchikh seemingly picked up almost where she left off last season. In her last appearance, the Ukrainian twice broke the outdoor world U20 record, topping 2.02m and 2.04m at the World Championships in Doha.

Sullivan breaks through in Blacksburg

Darryl Sullivan produced the biggest surprise at the Virginia Tech Invitational in Blacksburg. The 22-year-old added seven centimetres to his outright PB by winning the high jump with 2.33m. The leap moves him to 12th on the US indoor all-time list.

Jacory Patterson, meanwhile, moved to just outside the world indoor all-time top 10 by clocking 32.28 to win the 300m.

At the Texas Tech Corky Classic, NACAC U23 champion Tonea Marshall smashed her lifetime best for the 60m hurdles, clocking 7.86. The 21-year-old had not bettered eight seconds for the event before this year, although her 8.02 clocking at the age of 17 showed huge potential.

At the Air Force Invitational in the altitude of Colorado Springs, Kyle Pater added 17 centimetres to his pole vault PB, sailing over 5.82m.

World 100m hurdles record-holder Kendra Harrison opened her 2020 campaign with a flat sprint, winning the 200m at the Leonard Hilton Memorial in Houston in 23.18, just 0.08 shy of her indoor best.

Jacob Wooten kicked off his indoor season with a 5.80m lifetime best clearance to highlight the Pole Vault Summit in Reno, USA, on Friday (17).

Opening with a first attempt clearance at 5.50m, Wooten needed a second try at 5.60m before sailing clear. He then topped 5.70m on his first attempt and 5.80m on his second. Ludwig meanwhile, needed two tries at 5.70m. Both bowed out at 5.85m, Ludwig with three attempts and Wooten with a single effort.

Swede Lisa Gunnarsson, the 2018 world U20 silver medallist, won the women's competition at 4.50m on countback over Lexi Jacobus. Gunnarsson, 20, a student at Louisiana State University, has an absolute best of 4.60m set in 2018.