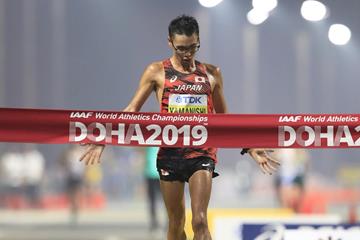 The bespectacled 23-year-old seized control of the race between 7-8km and never relinquished his advantage as he tamed the hot and humid conditions to strike gold in 1:26:34.

Vasily Mizinov, the authorised neutral athlete, stormed home with a final 5km split of 20:53 to grab silver. Perseus Karlstrom, who mounted a strong challenge in the third quarter of the race to close Yamanishi, earned Sweden its first men's race walking medal at a World Championships by taking bronze in 1:27:00.

The first significant moves were made by Great Britain’s 2016 world U20 10,000m race walk champion Callum Wilkinson and China’s Asian Games champion Wang Kaihua, who opened up a handy gap on the field just beyond quarter distance.

Wang had opened up a 40-metre advantage but Yamanishi, who earlier this year recorded the fourth fastest time in history with a 1:17:15 clocking to land the Asian title, was first to respond to the Chinese athlete’s thrust.

The Japanese race walker, who could be one of the star names at the Tokyo 2020 Olympics, put together back-to-back 4:15 kilometre splits to glide past Wang and by 9km held a 13-second lead on a group containing the Chinese race walker, Karlstrom, Italian record-holder Massimo Stano and Koki Ikeda of Japan, the 2018 IAAF World Racing Walking Team Championships gold medallist.

Half distance was reached in 46:06 by Yamanishi – who was showing no sign of distress – some 17 seconds clear of the chasing pack, which now also included Turkey’s Salih Korkmaz, the European U23 silver medallist.

By 12km Yamanishi’s advantage had been trimmed to 12 seconds, although Stano’s bid for a medal was over as he was forced to serve two minutes in the pitlane following three red cards.

The Japanese athlete marched relentlessly on and by 15km (1:05:28) the lead was back up to 15 seconds. Behind, Karlstrom put the hammer down following a 4:07 one kilometre split to open up a clear 12-second advantage on Korkmuz, who now held third.

The 29-year-old Swede briefly offered hope he could bridge the gap on the long-time leader and at 16km the advantage was reduced to 13 seconds.

However, Karlstrom had over-exerted himself in pursuit of gold and by the 18km checkpoint – reached in 1:18:03 by the Japanese athlete – his lead was now 25 seconds and the Swede had a flying Mizinov just nine seconds adrift.

By 19km the authorised neutral athlete had moved into second and the medal order – barring any late calls by the race walking judges – was determined.

In splendid isolation and just a few minutes before 1am local time he completed the 20km in 1:26:34. It was the first time since Spain's double triumph in 1993 that one nation had snared both men’s race walking titles at a World Championships.

Mizinov was rewarded with silver in 1:26:49 with Karlstrom (1:27:00) claiming Sweden’s first race walking medal since Madelin Svensson grabbed the women’s 10km silver in 1991.

Yamanishi was delighted to claim a second race walking gold for Japan in Doha and even consulted the 50km winner Yusuke Suzuki in preparation of the challenge ahead.

“It was good and helpful for me to receive some advice from Suzuki," he said. "I used a towel around my neck, and it made the race a bit easier. When I started to speed up after 7km I expected athletes to follow me. I was surprised and lucky nobody did. I wanted to walk faster in the final 3km but it was impossible. I hope this medal will give me a lot more confidence for Tokyo.”

Behind the podium finishers, Germany’s Christopher Linke, who was ninth at halfway, finished strongly to place fourth in 1:27:19. Korkmaz produced a best ever finish for Turkey at a World Championships race walk in fifth (1:27:35) with Great Britain’s Tom Bosworth achieving the same feat for his country in placing seventh (1:29:34). Sandwiched between the pair was the second Japanese race walker, Ikeda, in 1:29:02.

Of the 52 starters, a total of 40 men completed the race. Seven competitors did not finish and five race walkers were disqualified.