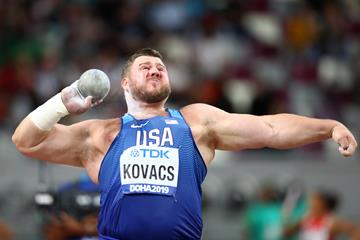 With the opening effort of the men’s shot put final, Ryan Crouser produced the longest throw in World Championships history with 22.36m

By the end, that mark was just the equal-seventh best of the night in what proved to be the greatest – and closest – shot put competition ever.

USA’s 2015 world champion Joe Kovacs produced one of the biggest upsets of the championships by unleashing a final-round effort of 22.91m to take the title. After a thrilling final round, just one centimetre ultimately separated the three medallists with Crouser taking second place on countback from Tom Walsh, both throwing 22.90m.

The opening round had very much set the tone. Crouser’s initial 22.36m added 13 centimetres to the championship record that had been held by Switzerland’s Werner Gunthor back in 1987. Brazil’s Darlan Romani opened with 21.61m and New Zealand’s Jacko Gill followed with 21.41m – both distances that were worthy of a medal at all World Championships from 1991 to 2013 but in such a high-quality line-up, even Romani and Gill knew they’d need to throw farther to hold on to a podium position.

That hunch was confirmed with the final throw of the first round as Walsh sent his 7.26kg shot flying out to 22.90m – the fifth-best throw in history, the longest in the world since 1990 and enough to move the New Zealander up to fourth on the world all-time list.

More big throws came in round two. Romani unleashed a 22.53m put to move into second place and Kovacs managed 21.63m to climb up to fourth place.

Not much changed in the positions after round three, but Crouser equalled his best mark of 22.36m and Romani sent another shot beyond the 22-metre line, landing it at 22.03m. USA’s Darrell Hill moved ahead of Kovacs into fourth place, throwing 21.65m.

At the half-way point, Canada’s Tim Nedow (20.85m), Czech Republic’s Tomas Stanek (20.79m) and Croatia’s Filip Mihaljevic (20.48m) all missed out on making the top-eight cut, despite producing marks that would have been sufficient for a medal at the 1991, 1993, 1995 and 1997 World Championships. Serbia’s Armin Sinancevic also exited the competition, having failed to register a valid mark.

Kovacs moved up the standings again in the fourth round, improving to 21.95m. Romani followed it with 22.13m, and then Crouser improved to 22.71m, the second-best throw of his life to close in on Walsh’s lead. For the third round in succession, Walsh sent his shot flying way out beyond the 22-metre line but fell out of the circle.

No one improved in round five, but Walsh managed to land another big throw. It was initially judged to be a foul, but following a protest he was given a valid measurement of 22.56m. The leader board took another shake-up in the sixth and final round, though.

Kovacs stepped into the circle for one last time, spun around and produced the throw of his life. As it landed beyond the 22-metre line, it was clear that he had got into the medal standings but he had to wait a few moments for the score board to confirm his mark. His 22.91m was not only a lifetime best, but it had moved him into the lead, one centimetre ahead of Walsh.

Romani was next to throw but he spun out of the circle. It was then Crouser’s last chance to improve – and that he did, matching Walsh’s 22.90m effort. Given his superior next-best mark of 22.71m, Crouser moved into second place.

With the crowd still roaring in delight following the mammoth efforts from Kovacs and Crouser, Walsh walked into the circle to take the final throw of the final. Once again, his shot landed beyond the furthest-placed white line, but once again he failed to stay in the circle.

Walsh ended the competition as the sixth-best thrower in history but just the third best on the night. The final produced three of the seven best throws in history. It was also the first competition in which four men threw beyond 22 metres and the first major championships final with eight men throwing beyond 21 metres.

“Coming into this competition, I was hoping for a PR, and then I saw Ryan throwing far and the others throwing far,” said Kovacs, who took Olympic silver in 2016 and world silver in 2017. “I just cannot be happier to get the gold medal. This is definitely the final that made history.”

Walsh, meanwhile, was content to take bronze in such a high-quality competition.

“I am not angry, I am very happy with my throws,” he said. “I don't think they were the perfect throws, but they really deserved it. I still can't quite believe it.”

Romani’s 22.53m – a throw 30 centimetres better than the championship record leading into this competition – was ultimately only enough for fourth place. Hill finished fifth and Bukowiecki sixth.