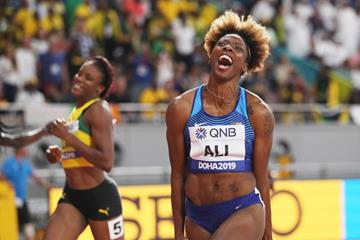 The ‘supermom’ theme that had been set at the start of the championships by some of the first few winners of women’s titles had a reprise in the final individual track event of the week.

Now Nia Ali, winner of the 100m hurdles in Doha, can be added to that list.

Earlier this year, though, the 30-year-old Olympic silver medallist – who has a four-year-old son and a one-year-old daughter – went on record to say that she is no weaker for having had two children.

“Having babies makes us stronger,” she tweeted back in July. “There’s nothing weak about having a baby, so what makes any one person think we won’t ‘make it through it’ and succeed?”

The two-time world indoor champion had progressed steadily through this season and earned her place on the US team after finishing second at the national championships. Before heading to Doha, she had only one won one final this season, but she had proven time and time again that she is a strong championship performer.

Jamaica’s 2015 world champion Danielle Williams and USA’s world indoor champion Kendra Harrison went into the championships as the medal favourites. Williams won her semifinal in 12.41, finishing 0.03 ahead of Ali, while Harrison won hers in 12.58. Nigeria’s Tobi Amusan also emerged as a contender after winning her first-round heat in a PB of 12.48 and then equalling that time to win her semifinal.

Those same four women got out best in the final and were level over the first few barriers. But while many were looking at Williams or Harrison to edge ahead, it was Ali who emerged as the leader at half way.

A proven championship performer, Ali held off the strong three-pronged challenge from Harrison, Williams and Amusan and crossed the line a metre ahead of her rivals, stopping the clock at a lifetime best of 12.34 (0.3m/s).

Harrison got the better of Williams on the line, clocking 12.46 to take the silver medal just 0.01 ahead of her Jamaican rival. Amusan was fourth in 12.49. It was just the second time in history, after the 1987 World Championships final, in which four women have bettered 12.50.

“This is super special,” said Ali. “I have never won an outdoor world title, I am ecstatic. Shelly-Ann, Allyson, all the ladies who have come back from child birth are an inspiration for me and I am so excited to be able to pull of the world title.”

Andrea Carolina Vargas became Costa Rica’s first ever finalist at a World Championships and she rose to the occasion, setting a national record of 12.64 to place fifth. Nadine Visser of the Netherlands was sixth (12.66) and Jamaica’s Janeek Brown seventh (12.88). Her compatriot Megan Tapper did not finish.