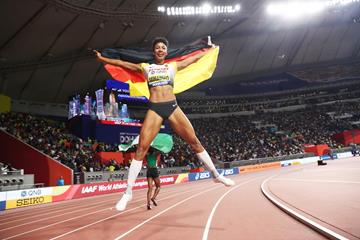 Malaika Mihambo landed among the all-time greats after a dominating performance in the women's long jump final on the final evening of the IAAF World Athletics Championships Doha 2019.

Sitting uncharacteristically in seventh place after the second round, the 25-year-old German blasted down the runway as she approached the board for her third attempt and sailed through the still, warm Doha air before landing farther into the sand than she ever had before. Looking up from the pit, a smile instantly appeared. She knew it was a good one. And it was, a 7.30m leap which, when the sandy dust had settled, landed the 25-year-old just one centimetre shy of the all-time top ten.

Only the legendary Jackie Joyner-Kersee has sailed farther at a World Championships, and she did it twice: 7.36m in 1987 and 7.32m four years later in Tokyo to successfully defend her title.

"That was so amazing," said Mihambo, who added 14 centimetres to her career best. "It was a difficult competition but I'm really glad I came through."

Mihambo kicked off with a modest - by her standards - leap of 6.52m in round one, which placed her just seventh after a surprisingly strong opening round. The early leader was Nigerian Ese Brune who took command of the competition with a 6.83m opener. Brune underscored her medal attentions with a 6.91m effort in the second round, the third farthest jump of the 23-year-old's career.

Mihambo fouled in the second round but, with her back to the wall, returned in the third with her big jump to all but seal the victory.

Catching her breathe, she passed her fourth round effort then came back with a solid 7.09m jump in the fifth round before closing off with a 7.16m in the sixth, a leap equalling her PB prior to this evening.

"There was a really tight moment for me, that third attempt," Mihambo said. “The third attempt, it had to work. I told myself, ‘You have to make this one valid no matter what. And it worked.”

Her big jump, and her seven-metre efforts in rounds five and six, were an appropriate night cap for a season in which she’s gone unbeaten in ten competitions, and jumping beyond seven metres in six of those, seven if you included a wind-aided 7.11m (+2.2m.s) victory at the European Team Championships.

Behind her Maryna Bekh-Romanchuk of Ukraine overtook Brune with a 6.92m lead in the fifth round to wrestle silver from Brune who produced one of the most consistent series of the evening. The Nigerian reached 6.90m in round three, 6.87m in four and 6.84m in five, all superior to Tori Bowie’s 6.81m from the fourth round which landed the American in fourth.