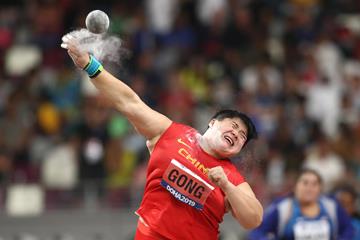 Admirably living up to her favourite’s role, Gong Lijiao successfully defended her title in the shot put to become the fourth woman to collect back-to-back world championship victories in the event.

With wins in 12 of her 13 competitions this year, she was clearly the woman to beat in Doha, and set out to show just that from the opening round where she shook off the rust with a 19.07m heave to take the lead, one she never relinquished.

She extended it to 19.42m in the second before putting it out of reach for good with a 19.55m effort in the fourth.

“I have a saying that there is nothing better you can stick with than your dreams,” said Gong, whose title was the third for China at these championships. “This title will help me increase my self-confidence in future competitions.”

In the early going it looked as though she would run away with that title, but she found herself with company midway through the competition when Danniel Thomas-Dodd, the world indoor silver medallist, began to apply the pressure with a 19.36m third round effort. That forced Gong’s 19.55m response in round four - padding, as it turned out, that she needed.

Thomas-Dodd was upbeat as she returned to the ring in round five, unleashing a throw that landed squarely on the 20-metre line, just as the red flag was raised to indicate a foul. Gong followed with a long foul of her own that also brushed the 20-metre line. A battle was on.

The Jamaican champion responded well again in the sixth round, improving to 19.47m, the third best throw of her career, but still falling a bit shy. Gold was Gong’s.

“It’s definitely a big accomplishment for me,” said the 26-year-old who twice improved her own Jamaican record, first to 19.48m in April and again to 19.55m in August when taking the Pan-American Games title.

She finished fourth at these championships in London two years ago, a finish she now looks back on as a learning experience. “I was disappointed in London but it was my first and I had to take everything in strides and make a mark for myself. I’m very happy with my performance today.”

Further back, Germany's Christina Schwanitz reached 19.17m in the fifth round to wrestle bronze away from USA's Maggie Ewen, who was forced to settle for fourth with 18.93m.