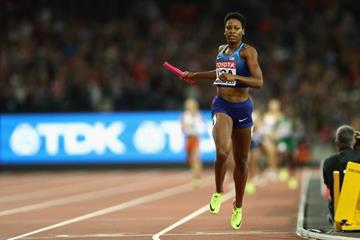 After the drama in the men's 4x100m when Bolt pulled up with cramp on the last leg, it was a similar story for Jamaica in the women's 4x400m, as second-leg runner Anneisha McLaughlin-Whilby pulled up injured while in second place.

This left the USA with a clear path to victory and the nation known for its rich history in the 4x400m rose to the challenge, clocking a world lead of 3:19.02, almost six seconds clear of silver medallists Great Britain (3:25.00) and Poland (3:25.41) in third, to regain the world title they last won in Daegu in 2011.

The USA were the overwhelming favourites heading into the final, having taken victory at both the Olympic Games in Rio last year and at the IAAF World Relays Bahamas 2017.

In the heats 24 hours prior, the quartet of Quanera Hayes, Kendell Ellis, Shakima Wimbley and Natasha Hastings made their intentions clear, setting a world lead of 3:21.66. Swapping in freshly crowned world 400m champion Phyllis Francis and bronze medallist Allyson Felix for the final, victory was never in any doubt and the quartet of Hayes, Felix, Wimbley and Francis enjoyed a gun-to-tape victory, extending their winning margin on every leg.

"We passed the test,” said Hayes. “Well done to all the girls, they all ran awesome legs.”

At the end of leg one, the USA's Hayes (50.56) led from Jamaica's Chrisann Gordon (50.98) and Nigeria's Patience George (51.46). However, disaster struck for the Caribbean nation less than 100 metres into the second leg, as McLaughlin-Whilby pulled up, suddenly leaving the door open for other teams to make their charge.

Running a storming leg of 50.83, Great Britain's Laviai Nielsen capitalised on Jamaica's misfortune, coming through strongly for second place at the end of leg two ahead of Poland and Germany.  Meanwhile, with a 48.64 clocking – the fastest of all the relay runners – Felix extended the USA's lead by more than three seconds at the halfway point.

Little changed at the front on leg three, as Wimbley continued the USA's dominance with 49.60 – the only other sub-50-second clocking of the race – as British team captain Eilidh Doyle held off a chasing Aleksandra Gaworska of Poland.

As Francis (50.22) continued the US procession on the anchor leg, Emily Diamond ran a smart and measured race to hold off Poland's Justyna Swiety and ensure the British quartet upgraded their bronze medals from the Olympic Games last year to silver.

Poland was delighted to win their country's first medal in this event in IAAF World Championships history, having also made the podium at the IAAF World Relays earlier this year.

Having taken gold medals in both the 4x100m and 4x400m relays – as well as her 400m bronze – at the IAAF World Championships London 2017, Felix has now won 16 World Championships medals, surpassing the previous record of 14 shared by Usain Bolt and Merlene Ottey.