A surprise world indoor record* for Poland, a third world indoor title for Renaud Lavillenie and a hometown hero taking gold were among the final highlights of the IAAF World Indoor Championships Birmingham 2018.

A 4x400m world indoor record was a fitting and thrilling end to the championships, as an incredible final surge by Jakub Krzewina saw Poland sweep past the USA in the final strides to produce one of the biggest upsets in IAAF World Indoor Championships history.

The USA, featuring two individual finalists to the Poles’ none, had led for the first three legs, in large part thanks to Fred Kerley’s blistering 44.84 first 400m, but never quite produced a gap large enough to finish Poland’s challenge.

Despite a four-metre lead as he took the baton, 2016 world indoor 4x400m gold medalist Vernon Norwood couldn’t hold off the fast-finishing Krzewina, as the Pole stopped the clock at 3:01.77. The USA also bettered their own previous record, finishing two tenths behind, as Trinidad and Tobago took bronze.

Title No.3 for evergreen Lavillenie

Renauld Lavillenie’s championship temperament shone through as he secured his third world indoor title thanks to a superb second-time clearance at 5.90m in the final event of the IAAF World Indoor Championships.

Vaulting sparingly throughout a competition that lasted close to three hours, the French world record-holder edged out the USA’s world champion Sam Kendricks and Poland’s world silver medalist Piotr Lisek, both of whom cleared 5.85m.

Renaud Lavillenie vaults at the World Indoors in Birmingham, where he won gold with a 5.90m clearance

But neither could match the Frenchman, who was fresher in the closing stages possibly thanks to his decision to enter the competition at 5.70m.

Kendricks took the silver thanks to his unblemished record up to 5.80m and Lisek’s first-time failure at 5.60m.

It was a middle-distance race that contrasted sharply with the pedestrian pace of the men’s 3000m and 1500m, as Wilson adopted a front-running tactic that so nearly worked.

Wilson led from the break and clocked a swift 59.02 for the first 400 metres, twice accelerating hard to prevent Niyonsaba from hitting the front.

But in the final reckoning, the Olympic silver medallist had too much, sweeping into the lead at the bell and powering to victory.

Great Britain’s Shelayna Oskan-Clarke ran clear of Ethiopia’s Habitam Alemu in the final 40 metres to take the bronze in 1:59.81, with all three medallists recording personal bests.

Andrew Pozzi’s lunge for the line in the 60m hurdles secured him a first global title, as he edged past the USA’s Jarret Eaton by just one hundredth of a second, raising the roof of Arena Birmingham in the process.

The 25-year-old had qualified fastest for the final following an impressive 7.46 clocking in the semi earlier in the session and started the final well, but clattered the second hurdle to leave himself half a metre down on the US champion off the final barrier.

But the Briton dug deep and lunged hard at the finish, somehow ensuring his torso crossed the line first and matching his earlier time to take the win.

Global gold at last for Spanovic

Serbia’s Ivana Spanovic improved on her runner-up position in Portland two years ago thanks to a 6.96m leap in the fourth round of a long jump final that matched the quality of the horizontal jumps contests that had lit up the championships over the previous two days.

The 27-year-old had never previously won a global title, but signalled her intent with a 6.89m jump in the first round, a mark that led until three-time champion Brittney Reese equalled that effort in the fourth.

Spanovic, though, wasn’t to be denied, reacting positively at the first opportunity and, with USA’s Reese unable to improve, didn’t need to jump again to take the win.

Germany’s 2015 European indoor silver medalist Sosthene Moguenara-Taroum was third, thanks to 6.85m in the second round.

There has never been a podium clean sweep by any one country at the IAAF World Indoor Championships, largely due to the fact that nations have historically been restricted to two athletes per event. So there was a chance for history to be made in the 3000m, with Yomif Kejelcha, Selemon Barega and Hagos Gebrhiwet all toeing the line for Ethiopia.

Unsurprisingly, the trio stuck together in the early stages of a slow, tactical race in which the athletes took 74 seconds to negotiate the first 400 metres and 2:29 to complete four laps.

With six-and-a-half laps remaining, the Ethiopians hit the front and by the time the final four laps came round it was defending champion Kejelcha who was in control.

As the pace wound up, he remained in the lead and strode over the line in 8:14.41 to secure his country’s third title of the championships, a fact he celebrated with a jig of delight. He was followed home by his teammate, world U20 champion Selemon Barega, who edged out Kenya’s Bethwell Birgen, who successfully held off Olympic 5000m bronze medallist Gebrhiwet.

In fact, the top seven finishers finished within 0.73 of each other, courtesy of a first 400m that took more than 75 seconds to complete.

Tefera became the youngest man ever to win the title and is unlikely to care that the time, 3:58.19, was nearly 25 seconds slower than Haile Gebrselassie’s championship record.

The USA entered the women’s 4x400m as strong favourites for the title and duly delivered the gold following an emphatic championship record-breaking performance.

Quanera Hayes had to contend with a fast-starting Tetyana Melnyk over the first 200m, but settled into her running to hand Georganne Moline a lead. The 400m hurdles specialist stumbled on her second lap, which let Jamaica, in the form of Janieve Russell, close ground.

The women's 4x400m at the IAAF World Indoor Championships Birmingham 2018

With the individual gold and silver medallists, Courtney Okolo and Shakima Wimbley, on the fourth and third legs respectively, it felt unlikely that the USA would falter, and so it proved, although Stephenie-Ann McPherson did appear to claw back metres on the last leg for Jamaica.

So, the USA took gold with 3:23.85 and Jamaica set a national record in second, before later being disqualified after one of their runners lined up in the wrong order before receiving the baton.

That meant that Poland, who had set a national record 3:26.09 of their own, took silver and Great Britain the bronze. 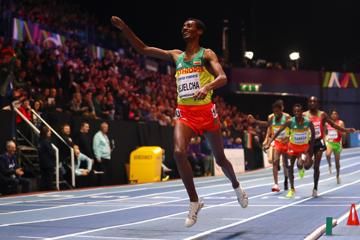 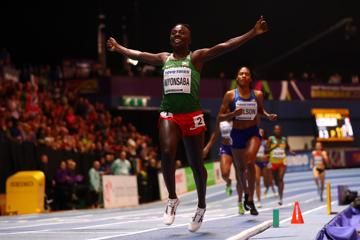 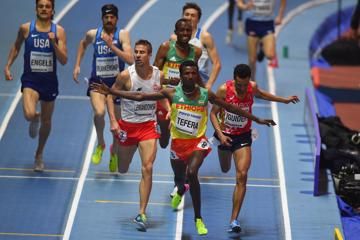 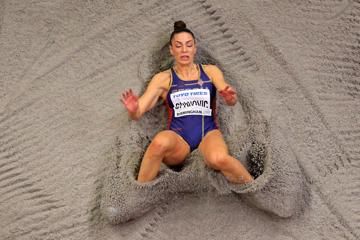 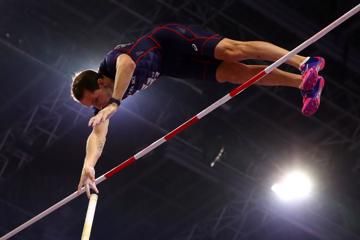 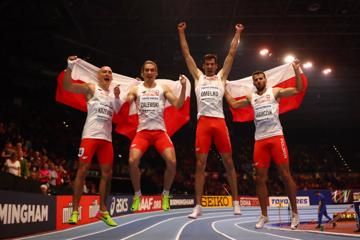 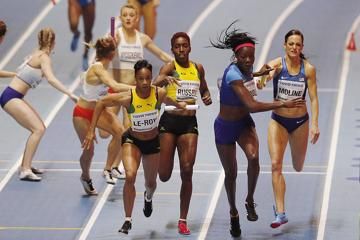