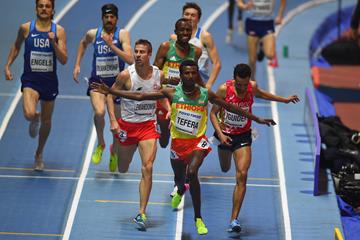 On the day the track and field world bade a sad goodbye to the man who achieved the most celebrated middle distance feat of all time, Sir Roger Bannister, it seemed fitting that a new talent should emerge into the global spotlight.

Earlier in the day Sebastian Coe, no mean middle distance runner himself, had paid fulsome tribute to the British predecessor who famously broke through the four minute mile barrier down the road from Birmingham at the Iffley Road track in Oxford on 6 May 1954.

Speaking at the launch of the IAAF Heritage Collection, the IAAF President described Bannister as “a giant” who’s sub-four minute success “allowed mankind to enter a new world filled with possibilities.”

There was also a touching tribute on the big screen in Birmingham Arena, a video and photo montage of that barrier breaking run, before Samuel Terefa stepped on to the track and proceeded to fulfill the possibility of becoming the youngest ever winner of the world indoor 1500m title.

Not that there were any echoes of Bannister’s clock-chasing tour de force as the 18-year-old Ethiopian, who ran in the 1500m heats at the outdoor world championships in London last year, and the rest of the nine-strong set off on their seven and a half laps of the 200m track.

With 2012 champion Abdelaati Iguider of Morocco in the vanguard, they dawdled through the first 200m in 33.91 and then, with the bearded Ben Blankenship of the US in front, hit 400m in 1:15.84. Chris Brasher and Chris Chataway had taken Bannister though 400m in 58 at Iffley Road.

Not until 800m was reached in an equally pedestrian 2:23.68 (25 seconds down on that 1954 split) did the battle for gold begin in earnest. Terefa was in front by then, with Iguider and Blankenship in his slipstream.

Iguider was back in front with 400m to go and lead down the back straight on the final lap until Terefa swept past in the home straight to win in 3:58.19 – just 1.21 quicker than Bannister had managed over the mile distance that momentous day 64 years ago. In doing so, at 18 years 134 days, the east African became the youngest man to claim the crown. His fellow-countryman Deresse Mekonnen was 20 years 140 days when he won in Birmingham in 2003.

"The race was very slow early on,” Terefa reflected. “It was very tactical and that wasn't good for me, but in the last two laps I was able to use my power to win."

Lewandowski was happy with his silver. “I managed to stay patient until the very end to find the right moment to attack,” he said. “I knew there was a slight chance for a gold but I am over the moon with the silver medal because it the first for Poland in this event.

“I have fought for it seven times in finals indoors and out. Finally, I got it."

Iguider, however, could not hide his disappointment with third place. “I came here for the gold medal, not the bronze,” he said. “It was the last 40m that did for me.”