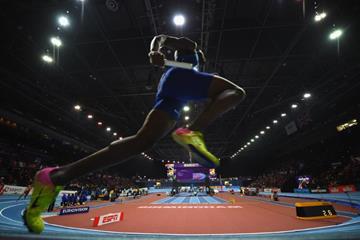 Pre-event favourites the USA justified that tag as they progressed to Sunday’s 4x400m final with minimum fuss.

Unbeaten at the IAAF World Indoor Championships since 2004, the defending champions put on an exhibition of indoor relay running in the second of two heats, with Fred Kerley, whose best individual time of 45.18 makes him the fourth quickest in the world this year, getting the team off to the perfect start. Following his 45.20 split, the US team was never challenged.

Marqueze Washington, Paul Dedewo and finally Vernon Norwood, who anchored the gold medallists in Portland two years ago, completed the job and their 3:04.00 clocking was by far the quickest of the morning.

Behind the favourites, Great Britain took second place following a solid showing, as the host nation’s quartet ensured that they were never seriously challenged by either Spain or the Dominican Republic.

The quartet of Owen Smith, Seb Rodger, Jamahl Roden-Stevens and Grant Plenderleith appeared to be working hard, but their efforts paid off, securing a margin of more than two seconds over the Spanish team.

The first heat was rather more competitive.

Poland’s Karol Zalewski powered out of the blocks and had a three-metre lead before the end of the first 200-metre lap. It was an advantage that he and his teammates maintained over a Belgian team featuring all three of the Borlee brothers alongside Jonathan Sacoor until the final lap of the race, when Kevin Borlee attacked down the back straight. He passed Jakub Krzewina and sped to victory in 3:05.22, despite the Pole’s late charge for the line.

Poland did take the second automatic qualification spot, however, with just two hundredths of a second separating the teams.

Despite never contending to win the race, Trinidad and Tobago and the Czech Republic both qualified for Sunday’s final on time.