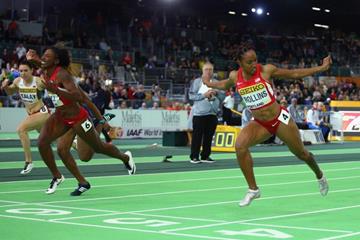 In the build-up to the women’s 60m hurdles final, all the talk was about the two Americans who had recorded blistering times to win their semi-finals, Brianna Rollins and Kendra Harrison.

Almost overlooked was the reigning champion, Nia Ali, but the 27-year-old American crowned a comeback for the ages by sweeping to victory in 7.81, a hair’s breadth ahead of Rollins, who took silver in 7.82. Great Britain’s Tiffany Porter took her second successive bronze medal at this event by running 7.90 to finish third.

For Harrison, who had run 7.81 to win her semi-final earlier in the night, there was nothing but regret. The American flew from the blocks after the gun fired, and if anything reached the first hurdle too fast, clattering into it and putting an immediate end to her race.

Rollins, meanwhile, stumbled slightly emerging from the blocks but recovered well to lead midway through the race. All the while, though, Ali was clearing barriers with the same precision she used to win the title in Sopot two years ago, and when she came off the final hurdle, she edged ahead of Rollins to take victory in a photo finish.

“In the hurdles, it’s always close,” said Ali. “I had the best race of the season today and it couldn’t have fallen on a better day.”

Ali took time out from the sport last year to give birth to her son, Titus, who she cradled in her arms through the victory lap tonight.

“Titus probably won’t remember these moments, but it means a lot to me. Being a mother and a professional athlete can sometimes be a struggle, but I can’t take full credit for this because I have an amazing support system.”

Rollins was equally as pleased with her silver medal as she was for the defending champion. “To be able to share the 1-2 with a really good friend is exciting,” she said. “She just had a baby so to see her go out and perform like that is great.”