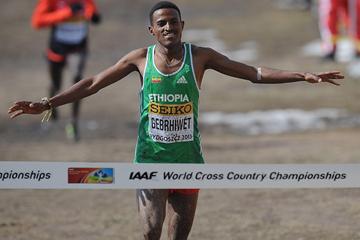 Ethiopia's Hagos Gebrhiwet confirmed his status as the favourite to take the junior men's title at the 2013 IAAF World Cross Country Championships with a wonderfully assured and mature run, hitting the front with 500m to go before winning his first major international championship medal on Sunday (24)

It was the first gold medal of what could be, and should be, a star-studded career.

Still  just 18, Gebrhiwet clocked a World junior indoor 3000m record of 7:32.87 in Boston at the start of last month. He also ran a World junior 5000m record of 12:47.53 at the Samsung Diamond League meeting in Paris last summer before going on to make the London 2012 Olympic Games final over the same distance.

However, regardless of his accomplishments in the future, this  was a moment to remember for the delighted Gebrhiwet.

“It was a very tough course but I am so very happy,” he reflected.

He covered the 8km course in an astonishingly fast 21:04, the fastest winning time since 1993 disregarding the slight variances in distance, and he seemed unconcerned about the chilly weather which saw temperatures hover just below zero.

The pace was made so quick by the hard work of Gebrhiwet's Kenyan opponents, notable the eventual silver medallist Leonard Barsoton.

From the gun, the Kenyans tried to control the race and after just 500m there was a quartet of red shirts at the head of the race.

However, behind their Rift Valley rivals, Gebrhiwet and his team mate Muktar Edris were running comfortably and easing themselves into the race,

At end of the first lap, the field had already been strung out. Between the leading group of eight men, who were racing in almost in single file, there was a six-second gap back to the next man.

By 3km, midway around the second lap, the race started to take a discernible shape with the be-hatted Leonard Barsoton pushing the pace from Gebrhiwet and Edris as the 2012 World Junior Championships 3000m Steeplechase gold medallist Conseslus Kipruto hung on to stay with the leaders, while a gap developed behind the leading four men and four other runners from East Africa.

Kipruto started to slip back in the fourth kilometre as Barshoton kept pushing at the front, shadowed by the two Ethiopians.

On the third lap, Barsoton continued to valiantly try to shake off his two-better known rivals, injected brief surges of pace, and he partially succeeded as Edris started to slip back shortly after the bell but Gebrhiwet refused to be dislodged.

He just bided his time before executing the attack that delivered him the gold medal.

Barsoton crossed the line four seconds after Gebrhiwet in 21:08 to take an unexpected silver medal, after only being the second man home at the Kenyan trials last month, while Edris hung on to take the bronze medal in 21:13.

Eritrea’s Tsegay Tuemay came through strongly on the last lap to take fourth place but was somewhat adrift of the three medallists as he crossed the line in 21.26.

Having two men on the podium helped Ethiopia win the junior men's team title for the first time since 1998 and only the second time since 1988 with Kenya taking the honours on every other occasion.

The winners had their scoring quartet completed by Birhan Nebebew in sixth place and Yihungilgn Adane in 13th  to finish with 23 points, three less than their Kenyan rivals.

Morocco took the team bronze medals in this category with 65 points, getting their four scorers home in the top 21, to return to the podium for the first time since 1998.