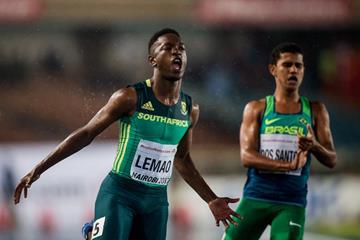 Tshenolo Lemao delivered a historic performance on Wednesday evening (12) at the IAAF World U18 Championships Nairobi 2017, becoming the first South African athlete to win a world 100m title in any age division.

In fact, South Africa had never before won a 100m medal of any colour at the World U18 Championships, but tonight they secured the top two spots.

While Lemao’s compatriot Retshidisitswe Mlenga and Jamaica's Tyreke Wilson had entered the boys' final as the favourites, Lemao held his composure after the race was disrupted by two faulty starts in cold and wet conditions, charging across the line in 10.57.

“It was a great race to run. I was really excited going into it and I just wanted to go all out,” Lemao said.

“I knew the conditions would be tough, but I told myself I needed to stay strong and focused, and just go.”

Though Wilson will not compete in the longer event, both South Africans will turn out again in the 200m heats on Friday morning.