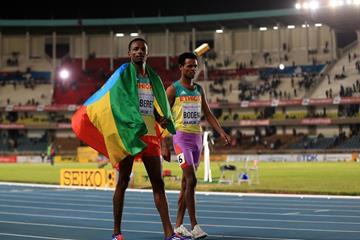 Ethiopia came out on top on Saturday in a thrilling four-way battle in the boys' 800m final, closing out a superb evening session of competition at the IAAF World U18 Championships Nairobi 2017.

After charging through the bell in 51.53, led by Japheth Toroitich of Kenya, the small lead group stayed together throughout the second lap.

Juan Castro of Costa Rica was the first casualty of the fast early pace, slipping back down the home straight.

While it seemed Toroitich might be able to hold on after his brave effort, Ethiopia's Melese Nberet delivered a late kick to take gold in a world U18 lead of 1:47.12.

"The race was fine. I knew I had to kick in the last metres so I preserved my energy on the first lap," Nberet said afterwards.

His compatriot Tolesa Bodena also finished well, crossing the line in 1:47.16 to grab second place and secure a one-two for Ethiopia, with Toroitich holding on for third in 1:47.82, as both athletes clocked personal bests.