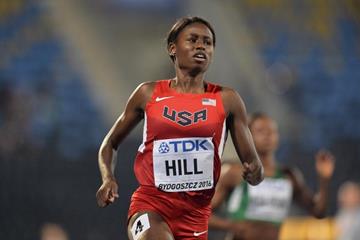 Another champion from Cali last summer was crowned world U20 champion in Bydgoszcz with Candace Hill becoming the first US winner of the women’s 100m title since Jeneba Tarmoh in 2008.

Hill began as the outstanding favourite for the title and her odds shortened again after she equalled Veronica Campbell-Brown’s long-standing championship record of 11.12 in the semifinals.

But home favourite Ewa Swoboda has been preparing specifically for this championships, eschewing the individual 100m at the European Championships in Amsterdam earlier this month in order to be in top form for Bydgoszcz.

Swoboda holds the world U20 indoor record over 60m at 7.07 – set this winter in Torun, about 20 kilometres to the west of Bydgoszcz – and the 18-year-old was brilliant out of the blocks through the rounds, clocking a wind-aided 11.10 in the heats and a national U20 record of 11.17 in the semifinals.

The Pole got another electric start in the final and was on level terms with Hill until about 80 metres when the US U20 champion inched ahead to claim the title in a championship record of 11.07 with Swoboda lowering her national U20 record again to 11.12, picking up her country’s first ever medal in this event in the process.

“My career is only just getting started. Get ready for faster running,” warned the silver medallist.

The three highlighted athletes before the championships in this event all ran to form with Khalifa St Fort claiming the bronze medal for Trinidad and Tobago in 11.18.

Swoboda and St Fort will be heading to Rio de Janeiro next month for the Olympic Games but Hill, who turned professional after winning the 100m and 200m titles in Cali last year, missed out on reaching the finals in both events at the ultra-competitive US Olympic Trials in Eugene at the start of the month.

“I was disappointed after the US Trials,” said Hill. “Now I feel blessed. My goal was to win and finally bring the title home. I wanted to beat the championship record and 11.07 is perfect for it.”

But Hill, who ran 10.98 aged 16 last summer, will surely be a force to be reckoned with in four years’ time in the build-up to the 2020 Olympic Games in Tokyo.